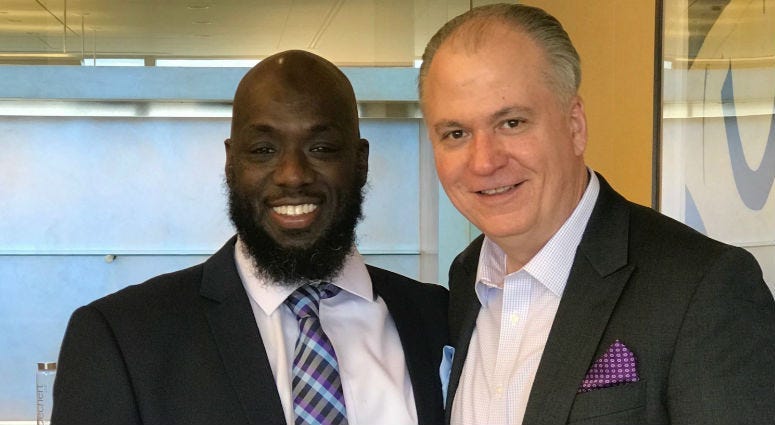 January 2, 2020 01/02/2020 9:00 am
PHILADELPHIA (KYW Newsradio) — The City of Philadelphia will pay out over $4 million to settle civil rights claims brought by a man who spent 24 years behind bars for a murder he did not commit. His wrongful conviction was linked to two rogue detectives.

"It's a happy moment for me. It's been a long hard fight," said Shaurn Thomas on his recent settlement with the city. "I went through so much with the city, it's just a shame."

Thomas was 20 when he was convicted of the 1990 murder of Domingo Martinez.

Despite evidence that he was in custody at the Youth Studies Center when the murder happened, Philadelphia police detectives Martin Devlin and Paul Worrell produced witness testimony implicating Thomas and his brother in the crime.

In May 2017, Thomas was released from prison. He and his brother were later exonerated.

Thomas' lawsuit was filed in September 2017.

"You would think that if they took somebody's life from them, (the police, the DA) would apologize, but they have not," he said.

"There's several people that went away and shouldn't have gone to prison," said James Figorski, an attorney with Dechert who worked on Shaurn's case along with the Pennsylvania Innocence Project.

Now, the two are implicated in at least one other wrongful conviction and there could be more.

One example is Willie Veasy, whose conviction rested on the testimony of a sole eyewitness despite evidence of an alibi. Veasy was set free in October after 27 years in prison.

"There were clearly flaws in the system at the time at best," said Figorski, "and those flaws are being addressed today in the court."

A spokesman for the city confirmed that the city settled Thomas' case for $4.1 million, but declined to comment further.

Thomas' case is the second largest settlement to a single exoneree.

In 2018, the city paid Anthony Wright $10 million to settle the claims related to his wrongful conviction. Wright was exonerated by DNA, but city prosecutors nevertheless pursued a second trial. The jury thereafter acquitted Wright of murder.

In 2018, Philadelphia also paid $3 million to settle a case brought by Eugene Gilyard and Lance Felder. The two men spent 16 years behind bars for a murder another man confessed to.

In July 2019, lawyers for Terence Lewis, who was set free and exonerated that May, filed a federal lawsuit against the city alleging rampant police misconduct.

Lewis spent 21 years in prison for a murder he did not commit, and his lawsuit claims police coerced witnesses, hid evidence and gave false testimony.

At least 33 states and the federal government provide some form of compensation, by law, to exonorees. Pennsylvania is not one of them.

Mayor Jim Kenney added in a statement: “I hope this resolution can assist Mr. Thomas and his family after the difficulties they experienced during his 24 years of incarceration. Our administration remains fully committed to ensuring our entire criminal justice system treats all people fairly.”

“After spending 24 years in prison, Mr. Thomas had the conviction vacated in 2017 and was not retried,” added Marcel Pratt, city solicitor. “The city and Mr. Thomas worked with a federal magistrate judge to resolve this lawsuit in the parties’ best interests. This resolution avoids further, protracted litigation and provides financial support to Mr. Thomas as he and his family try their best to move forward.”