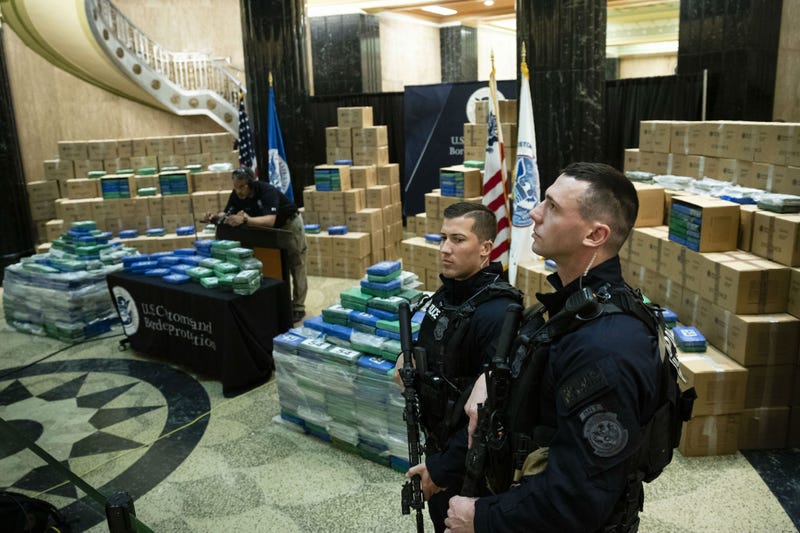 June 21, 2019 06/21/2019 5:54 pm
PHILADELPHIA (KYW Newsradio) — U.S. Customs and Border Protection says a multi-agency search of an international cargo ship at the Philadelphia Seaport this week has netted what it calls "the largest cocaine seizure" in its 230-year history: 17.5 tons.

Law enforcement officials held a show-and-tell briefing on Friday in the lobby of the U.S. Customs House at 2nd and Chestnut streets. Tables were stacked with bricks of cocaine. Behind them, boxes  stuffed with cocaine were stacked more than six feet high.

"What you see here today is only a quarter of the seizure," said Casey Durst, CBP director of field operations at the Baltimore field office. Officials seized a total of 35,000 pounds of cocaine.

Durst said that if all of the 15,582 plastic-wrapped bricks were laid end to end, they ould stretch 2.5 miles, or roughly the distance form the Customs House to the Art Museum. w

While the more than $1-billion cocaine bust happened Monday on a cargo ship docked at Packer Marine Terminal in South Philadelphia, information on those arrested has been slow to trickle out. It began with a tweet from U.S. Attorney Bill McSwain, who went aboard the MSC Gayane.

After the raid and bust on a cargo ship at the Philadelphia Seaport, @ICEgov, @USCG, @ONDCP, @USAO_EDPA call it the “largest seizure in the 230-year history of CBP”: 17.5 tons pic.twitter.com/vpIk02cpDO

Then, when the first court affadavit was filed, it supported arrest warrants for the ship's second mate, Ivan Durasevic, and a seaman, Fonofaavae Tiasaga. Court documents indicate both admitted their roles in bringing the cocaine onboard the ship, as two sets of smaller boats approached them at sea.

But the court records were sealed, as investigators went after bigger fish. The next day, four more crew members were charged. McSwain has a message to six defendants who face a hearing on Monday to determine if the charges are supported by probable cause.

"You thought you could breeze into our port, and then leave with enough cocaine to destroy millions of lives without getting caught," he said. "You thought you were clever. You were wrong."

If convicted, all face possible life prison sentences. McSwain says it's "a massive, stunning amount of cocaine," adding the investigation is fluid and ongoing, and more people or entities could be charged.