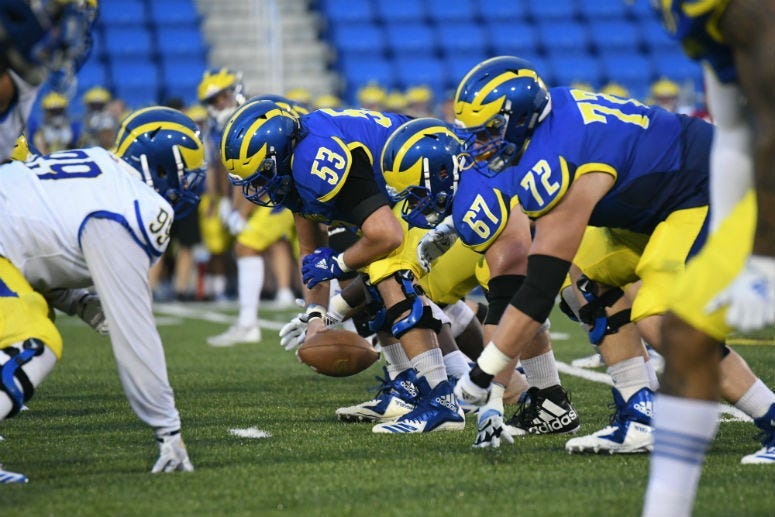 Head coach Danny Rocco is pleased with what he saw out of his 2019 squad in preseason camp.

"They did a great job," he told KYW Newsradio. "Our guys really worked hard, they came into camp fit and ready to go. I think we've made steady progress. We've got a lot of new faces, a lot of new names. We also had a lot of competition for a variety of positions out there. It's been a very spirited camp. I think we are very much ready and excited to get the season started on Thursday night."

The Blue Hens were very good last year, but Rocco says they've zeroed in on some areas that will allow them to be even better this season.

"I think offensively, we have to rush the ball better," he said. "Our average per rush was right at 3.0, which is not good enough. It was I think 11th in a league of 12. So we have to rush the ball with a higher average yards per carry. That'll set everything up that we're doing. With our offensive line and with these talented running backs, we should be able to be better there."

"Defensively," he continued, "we were 11th or 10th in sacks in the CAA and negative plays. So I really feel defensively we've got to be able to create more negative plays, more pressure on the quarterback, create more second and third and long situations."

The Blue Hens will be quarterbacked by redshirt senior Pat Kehoe, who threw 17 seasons last year.

"He's shown a lot of poise, just kind of poise and maturity," Rocco said. "He's been the calmest and the most consistent player out there during the course of camp. There's so many highs and lows and ups and downs. He's just always been in control and poised and confident. I think that really has helped our offense move forward. Then (redshirt sophomore) Nolan Henderson has also been able to show his talents back there and has done really, really well and I'm excited about the fact that I think we have our quarterback position aligned the way it needs to be aligned and it's certainly the best it's been probably in quite some time."

The wide receiver position is one that has undergone a lot of change since the end of last season.

"We lost four seniors who all had really good careers here during their timeline at Delaware," Rocco said. "Was really pleased the way this group stepped up. (Redshirt sophomore) Thyrick Pitts, (junior) Gene Coleman, (redshirt junior) Chichi Amachi, they all had really good camps. Dae'lun Darien, a (redshirt junior) transfer from Penn State did really well, (redshirt freshman) Austin Haverstrom. So I feel real good about that position heading into the regular season."

Delaware's Thursday night opener with Delaware State in Newark kicks off at 7:00 p.m.