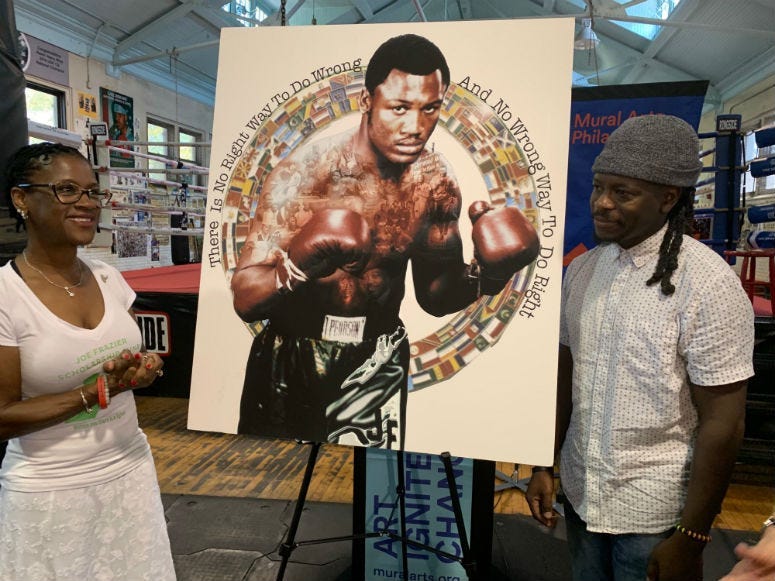 PHILADELPHIA (KYW Newsradio) — Philadelphia will soon add another mural to the hundreds already spread across the city.

Mural Arts Philadelphia unveiled plans and a first look at the latest work of art, which will honor legendary boxer and Philadelphian Smokin' Joe Frazier at an infamous spot boxing historians will definitely appreciate.

Work on the mural gets started July 27, and it will be at a place connected to one of the greatest boxing matches ever seen: the Fight of the Century.

Smokin' Joe Frazier loved to train on Boxers' Trail in Fairmount Park, so the mural will go up near the entrance on the northeast corner of 33rd and York streets. That's where legend says Muhammad Ali went to challenge Smokin' Joe to their unforgettable fight.

While Frazier was known around the world for his boxing talents, here in Philadelphia, he spent his post-fighting years training the next generation of boxers and staying involved in the community.

"This is not necessarily overdue, because things happen when they're supposed to happen as far as time is concerned. My family, we are grateful for the opportunity to be able to have Joe Frazier in a life form right in Philadelphia," said Weatta Frazier Collins.

She has many fond memories of her father, but there is one thing she wanted the mural to reflect about the man he was.

"My father was an advocate for the underdogs. That he was not the biggest heavyweight champion of the world, but he had one of the biggest hearts," she said.

Frazier Collins said that legacy is what drove her to form The Legacy Exists Joe Frazier Scholarship Fund, a nonprofit she now heads.

Artist Ernel Martinez said all of that will be included in the mural.

"Not only his legacy, his life story. His whole narrative. So when you look at the design you'll see all aspects of Joe's life, his childhood to his evolution as a boxer, his great battles with Ali," Martinez explained.

Martinez said he also worked in some art that reflects facts about Smokin' Joe not everyone knows about.

"Joe was a great singer, he was also a really good chef. He had a love for food, so here we have him cooking some food. He worked at a meat plant as a young man," Martinez said.

The design for the Smokin' Joe Frazier Mural was unveiled at the Athletic Recreation Center in North Philadelphia, which kind of followed in Frazier's footsteps by training some world class boxers.