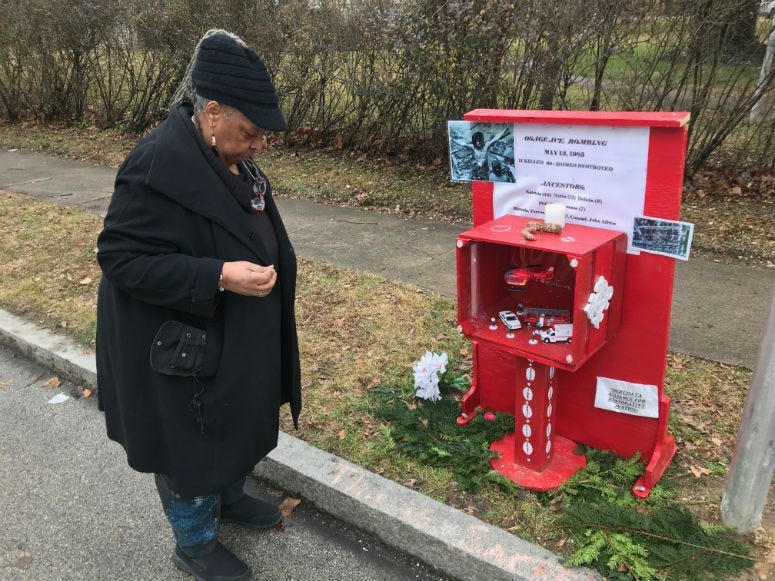 January 9, 2019 01/09/2019 2:55 am
PHILADELPHIA (KYW Newsradio) — Conflict over the naming of a section of North 59th Street after former Mayor Wilson Goode is brewing again. Over the weekend, a memorial shrine to the victims of the MOVE bombing was defaced, and tension is back.

"It's very intimidating," said Lalit Aggerwal, an Overbrook resident who has lived at the corner of 59th Street and Overbrook Avenue since the 1980s. He was empathetic with those who are opposed to the naming of Wilson Goode Way.

So when they asked for permission to build a memorial to the MOVE victims near his home, "I said it's okay, for a few days, it's okay," he said.

When Aggerwal alerted those who supported the memorial shine, giving them a deadline to remove the structure, his request was met with a rally and protest on Sunday. Argawal says he was frightened and called police.

"They told me to stay inside the house and not to come out," he said.

"It's made of wood and a lot of recycled materials," said Maisha Sullivan-Ongoza, an Overbrook resident and vocal opponent of the Wilson Goode Way street naming. She built the memorial, which includes a replica scene of what happened on May 13, 1985.

"The shrine has calmed the corner down, because people wanted to deface the Wilson Goode sign," she said.

But Ongoza filed a police report Sunday after finding the memorial vandalized.

"It was laying all in the street," she said.

At 4:30 on #CBS3 and on @KYWNewsradio - conflict over #WilsonGoodeWay is heating back up after a memorial shrine designed to quell tension is defaced. I’ll have more on why a neighbor wants the shrine gone. @CBSPhilly pic.twitter.com/C1b9EkKbGl

She repaired the memorial and reinstalled it.

Licenses and Inspections spokesperson Karen Gaus says the structure would not require a permit.

Aggerwal says in the past week, he's received a call from "a young woman" and threats.

"She said 'this is here to protect you,'" said Aggerwal, "'if you remove it, harm could come to you or to your property.' Those were her exact words."

There is no word from his office.