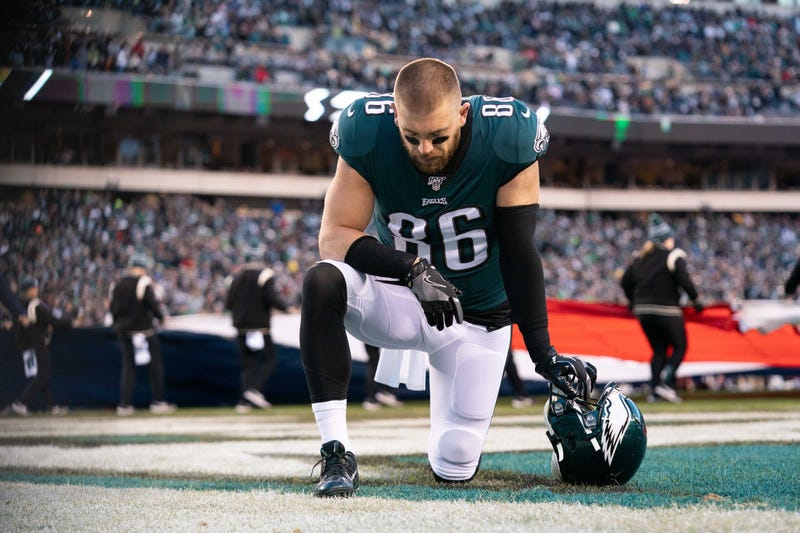 September 11, 2020 09/11/2020 4:54 pm
PHILADELPHIA (KYW Newsradio) — With the start of the Eagles season just days away — one of their best playmakers expressed some frustration about contract negotiations with the team.
Last week, NFL Network reported contract talks between the Eagles and the agent of tight end Zach Ertz “came to an abrupt halt” after the team’s latest offer apparently went down in guaranteed money.

Sources: Negotiations between the #Eagles and TE Zach Ertz came to an abrupt halt when PHI made an offer that had less guaranteed money than their offer in November. The backloaded offer also had less cash over the next 4 seasons annually than Austin Hooper’s #Browns contract.

Ertz has been with the Eagles since 2013 and has won a lot of games for them. There are two years left on his deal, but other top tight ends around the league have recently struck lucrative extensions.

"I know I’m gonna play this year like it is my last year, and I’m gonna leave everything I possibly have in the tank for this team and this city, because that’s what this city deserves — nothing less."

⁦@ZERTZ_86⁩ discussing contract situation and possibility that some day may have to play elsewhere other than with #Eagles. But he did say it’s not there yet. Somehow I think it will work out. ⁦@SportsRadioWIP⁩ pic.twitter.com/xT5dMdkaF1

He did admit that, during training camp, the situation got the best of him for a day or two.

"I really just had to talk to a couple people and reset my mind, lean into my faith that I can’t really control this situation," he said.

Ertz mentioned how his family — which is from the West Coast — is now based in Philly. He emphasized he wants to stay an Eagle for life.

"I always said, from the moment I got here: I wanted to be like Kobe. Kobe was a guy I always looked up to, Kobe Bryant. And he played with one organization his entire career, and that’s kinda what my goal was to always do — was to play here."