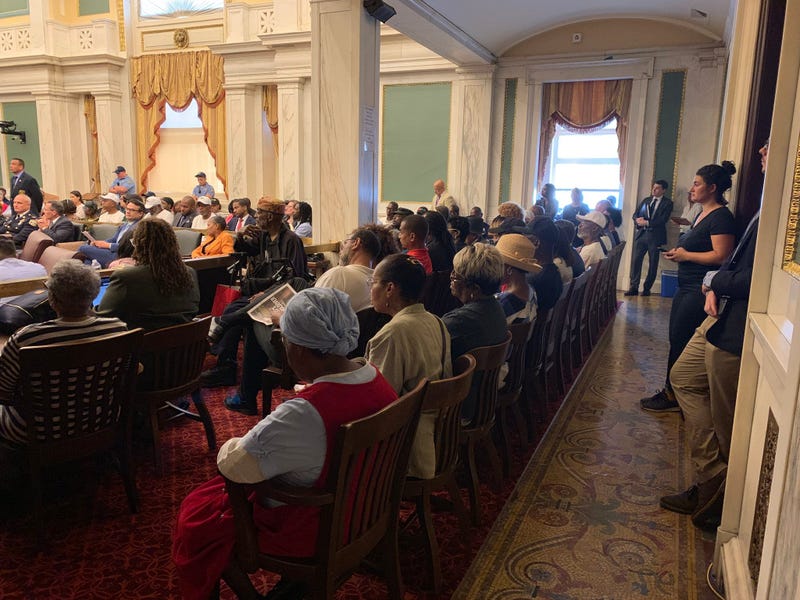 Council called the hearing to drill into the Philadelphia Police Department's response to revelations that more than 300 officers were identified in a nonprofit journalism database as having posted racist comments online.

But Commissioner Christine Coulter opened her testimony with an apology for her own actions 25 years ago, when she wore an LAPD T-shirt with a joking reference to the beating of Rodney King. It read, "We treat you like a King."

"It was clear that it was a bad decision on my part, and I would not wear that shirt today," she said.

That was not good enough for Councilmember Cindy Bass, who scoffed at Coulter's explanation that she didn't get the reference at the time.

"It is inconceivable that she was unaware that the T-shirt referenced the widely publicized, brutal beating of a citizen," said Bass.

Bass wrote a letter to Mayor Jim Kenney calling for Coulter's removal, which she read aloud at the hearing. A city spokesman said the mayor doesn't think that's warranted.

The digression was an indication of the resentments raised by the offensive Facebook posts, which were revealed in the spring.

Coulter said an investigation found that 193 officers violated the department's social media policy. Outside of the 15 officers no longer on the force, seven were suspended for 30 days, and most of the rest will go to Board of Inquiry hearings, where they could be reprimanded or suspended for up to five days.

Citizens filled the chambers to testify about the corrosive nature of the posts on public trust in the department — something that had not been high to begin with, according to witness Charise Abrams.

"There are so many individuals in Philly who suffer at the hands of bad police, and we never even think about it," she said.

Coulter also said new training and policies are coming, and the department will do its own monitoring of officers' social media accounts.