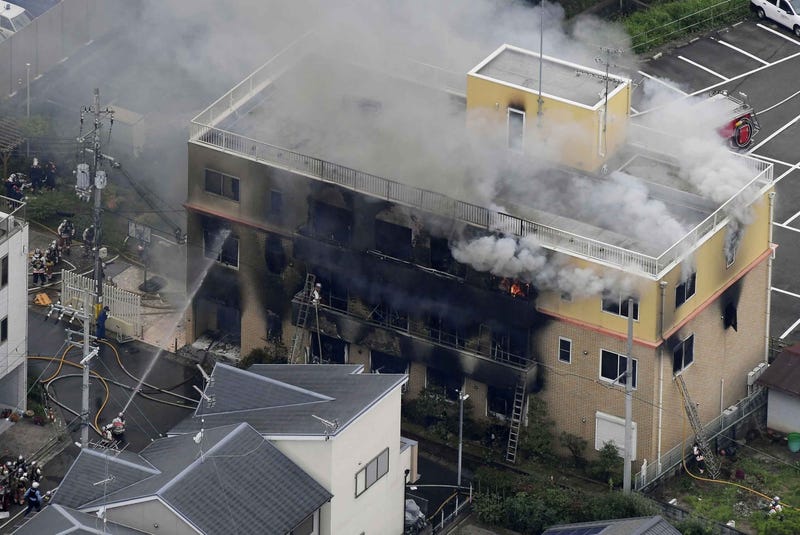 "The support from the global community and anime fans in response to this tragedy has been truly astounding," Kayle Campbell, Marketing Director for Sentai Filmworks, said in a statement to CNN. "We hope everyone continues to support the victims and their families in the days to come."

Among the more than 62,000 contributors is software company Adobe, which anonymously donated $50,000 to the campaign, according to a report from ITmedia News. An Adobe spokesperson confirmed the donation to ITmedia and said, "Kyoto animation is one of the centers of not only Japan but also the world's creative community."

Adobe did not immediately respond to a CNN request for comment.

Police in Japan are investigating why a man torched a renowned animation studio in what is being described as the country's worst mass killing in almost 20 years.

Police have identified 41-yer-old Shinji Aoba as the suspect who started the fire, accusing him of using gasoline to torch the studio.

The suspected arson attack left anime fans the world-over grieving the loss of life and a studio, which claimed to put its employees first and was a major force in the industry.

Fushimi police have not released the names of the victims, most of whom are women. Kyoto Animation's CEO Hideaki Yata told reporters last week the company had received death threats in the mail, which had been sent to the police, and expressed sorrow that workers in the industry had been targeted.

Founded in 1981, Kyoto Animation, also known as KyoAni, has developed a reputation around the world for being an unique workplace that produced animation series and published anime novels, comics and books, according to its website. As one of Japan's well-known studios, it's more notable works include "Free!," manga series "K-On!," the anime TV adaptation of "the Melancholy of Haruhi Suzumiya" and "Violet Evergarden," which Netflix picked up in 2018.

KyoAni have opened a dedicated account for donations on their website. The company says, "we will do our best to rebuild."

news
How to order a Santa frappuccino from Starbucks
music
RADIO.COM LIVE Check In: Jamie Lynn Spears on revisiting 'Zoey 101' with her own kids
news
Target reveals Round 1 of its 2020 Black Friday deals
sports
RADIO.COM Sports NFL Week 8 expert picks
sports
Jerry Jones cites weight, performance for releasing Dontari Poe: 'No need to get into the other stuff'
news
Parties blamed as 75 Northville Public Schools students in quarantine