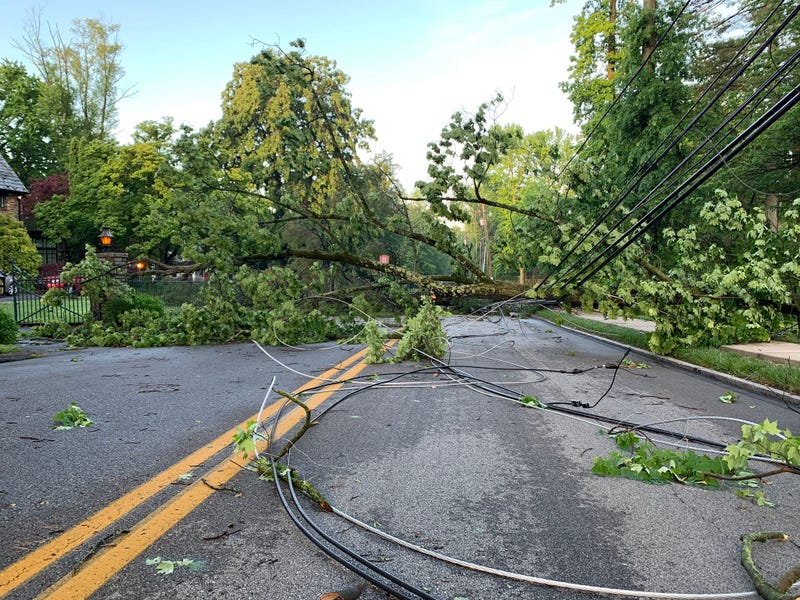 FORT WASHINGTON, Pa. (KYW Newsradio) — The severe weather that pummeled the Philadelphia region Wednesday left at least four people dead and hundreds of thousands of homes and businesses in the dark.

A derecho, a string of fast-moving storms with punishing winds, was the first big blow Wednesday around noon. And more storms, including a tornado warning, struck Wednesday night.

In Lower Merion, two people were killed when trees fell onto their cars. A staffer of the Philmont Country Club in Lower Moreland was killed when a tree slammed into a building. And in Delaware County, downed wires led to a house fire that claimed one life.

According to the National Weather Service, this is the highest number of fatalities from a derecho event in the area since 1950.

The chair of the Montgomery County Board of Commissioners, Dr. Val Arkoosh, said there were also a number of serious fires. The storm also ripped the roof off a seven-story apartment building, leaving 150 units uninhabitable.

This big fellow came down as a result of yesterday’s storms. Cleanup crews are going to have their hands full, today @KYWNewsradio pic.twitter.com/4FgUFiCfk9

With trees and power lines down, there are plenty of power outages. Hundreds of thousands of homes and businesses were affected, and some are still without power.

Arkoosh said some areas may be without power for several days, and many nursing homes are using generators.

Surveying the damage in Wynnewood, trees were ripped from the ground, some roots punching through sidewalks.

Uprooted tree in front of the Caskey Torah Academy in Ardmore. @KYWNewsradio pic.twitter.com/G7V2pW0EwT

More limbs and power lines sit in a heap at Remington Road and Lancaster Avenue.

Driving through the neighborhoods, the sound of generators hummed in harmony, as many people are scrambling in the summer heat with the loss of power.

Residents are trying to keep themselves and their food cool. One grocery store already ran out of ice. It’s a big inconvenience, as many people are still working or studying from home.

Fallen trees and broken limbs littered roads throughout parts of South Jersey too. In Magnolia, a tree fell on a house just off Evesham Road. A block away, an even bigger tree fell through a fence and into a park, narrowly missing a big electrical connection point.

In South Jersey, more than 86,000 PSE&G customers are still affected. Nearly 4,000 Atlantic City Electric customers in Burlington, Camden and Gloucester counties are also waiting for the lights to come back on.

That wait can be frustrating. Many customers were having trouble reporting outages on PECO’s website and were not being given estimated restoration times.

KYW's Mike Dougherty and The Associated Press contributed to this report.