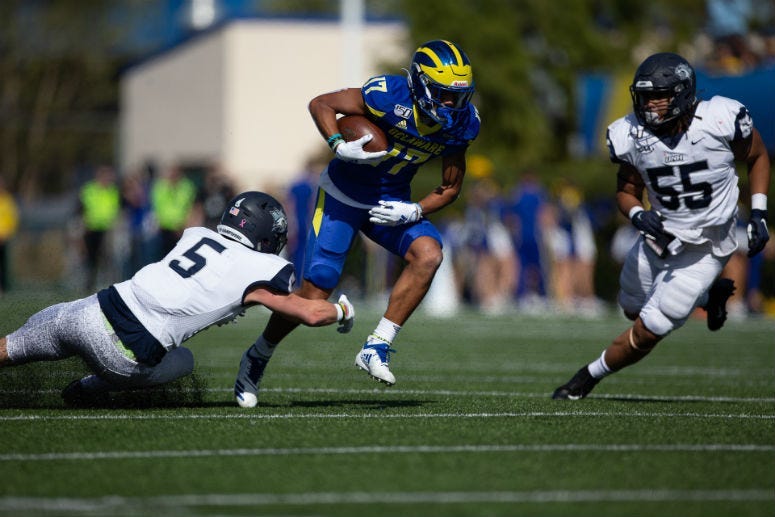 Delaware (4-4, 2-2 CAA) is coming off a 35-25 home loss to Richmond. The Blue Hens trailed by 14 points after a quarter and 18 points at the half. They got within three in the third quarter, but couldn't get over the hump.

"We dug a deep hole," Delaware head coach Danny Rocco told KYW Newsradio. "It was a little too deep to get out of. I think the biggest takeaway was that the four biggest plays in the game all belonged to (Richmond)."

Two of those big plays for Richmond were kickoff returns for touchdowns by Aaron Dykes. One was 100 yards and the other 88 yards.

Redshirt senior Pat Kehoe started for the second straight game at quarterback and threw for 164 yards and a score against the Spiders. Redshirt sophomore Nolan Henderson, who had been in concussion protocol, was available but didn't play.

Rocco talked about the quarterback situation for this week.

"I think it's fair to say you'll see both quarterbacks in this game," he said. "But I think Nolan's move from being available to being ready, I think a lot of times in the sports world you kind of hear those terms, but he was available last week, I don't know how ready he really was to perform at a high level. So I think this week's he's certainly moving from being available to being ready."

Towson is 4-4 (1-3 CAA) and coming off a 27-10 loss at James Madison. The Tigers are led by senior quarterback Tom Flacco (younger brother of Denver Broncos quarterback Joe Flacco), and he's thrown for 1,849 yards and 15 touchdowns while rushing for 297 yards and two additional scores.

Last season, Delaware beat Towson in a wild one in Newark, 40-36. The Blue Hens rallied from a 15-point second half deficit, scoring the winning touchdown with just thirty seconds left in the game.