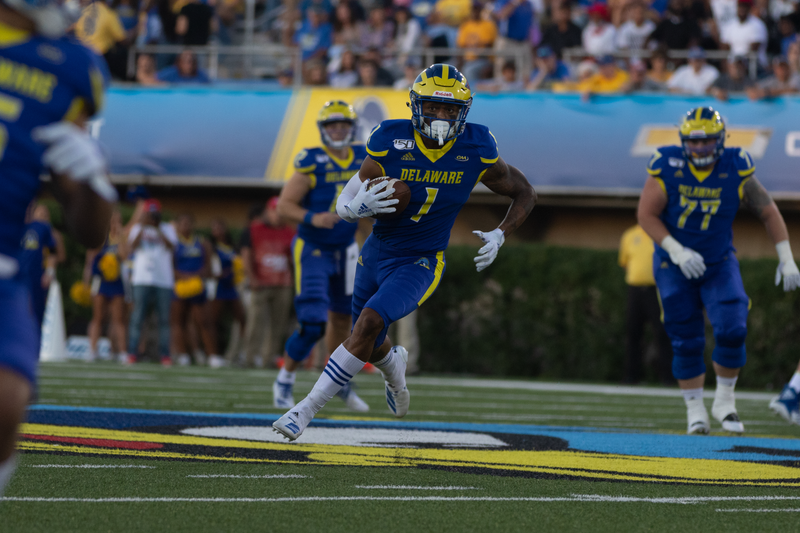 The Blue Hens opened their season last Thursday night with a 31-13 home win over Delaware State.

"Really took control of the game in the second quarter," Delaware head coach Danny Rocco said. "Third quarter, we came out and pretty much dominated the third quarter, and it gave us an opportunity to get a lot of guys into the game in the fourth quarter. We played a lot of guys throughout the course of the night. A lot of our true freshmen got opportunities to go out there and play. Had a chance to really build on some of our depth. So from that standpoint, and from the standpoint we came out healthy, had pretty good balance on offense, run and pass, protected the ball well offensively. I think there were a lot of positives to take out of the game."

Redshirt senior quarterback Pat Kehoe finished 18 for 28, for 186 yards and two touchdowns in the win. Nine different Blue Hens caught passes in the win with redshirt sophomore Thyrick Pitts leading the way with six catches for 81 yards and a score.

"I was real pleased with the performance of the recievers," Rocco says. "I was seeing it in camp. We lost a lot of, kind of, 'household' names there at the receiver position to graduation, but we were seeing it in camp. I feel really good about not only the talent, but the depth that we have at those positions."

Rhode Island is coming off a season-opening 41-20 road loss to FBS Ohio.

"They're very talented," Rocco said of the Rams. "They've got five players that are preseason all-conference. I believe four of them are on offense. Their receiving corps is arguably the best in the CAA. They threw the ball very well last week up at Ohio University, and Ohio's got a really good team and a really good program. This is a team that beat us last year at home (21-19) in the CAA opener in our opening game. So it's going to be a really good game."

Saturday night's game kicks off at 7 p.m. in Kingston.