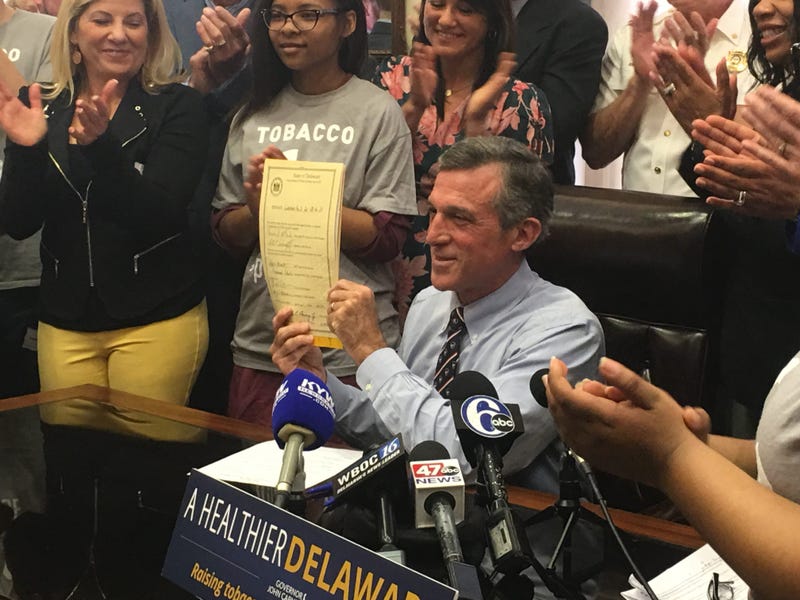 DOVER, Del. (KYW Newsradio) — The state of Delaware will soon raise the legal age from 18 to 21 to purchase cigarettes and tobacco products.

Gov. John Carney signed the bill with several young people present. Officials hope teenagers will benefit from the change, some estimating it could help hundreds to avoid smoking altogether.

However, up towards Wilmington, an 18-year-old need only drive across the border and buy cigarettes in Pennsylvania, even with the taxes a buck a pack higher.

"It's possible that Pennsylvania could join the team, if you will," Carney said. "But overall it’s a really important thing to promote health and wellness in Delaware."

For the governor, that’s the bottom line.

"It's a small tool in some ways," he added. "But if we could stop young people from smoking, we’re talking about saving lives and saving costs."

Locals are split on just how effective the new law will actually be. Brian Brown of Dover had a cigarette in hand as he thought about it outside the local Wawa along the DuPont Highway.

"It really doesn’t make a difference except for the manufacturers, where maybe it’ll hurt them in the wallet in the long run,” Brown, a retired New York City police officer, said. “But to be honest with you what age it is anybody’s gonna smoke. It’s just like anything else.”

Not far away, Katey Young of Smyrna almost wished the law was already in place.

The law takes effect in mid-July.