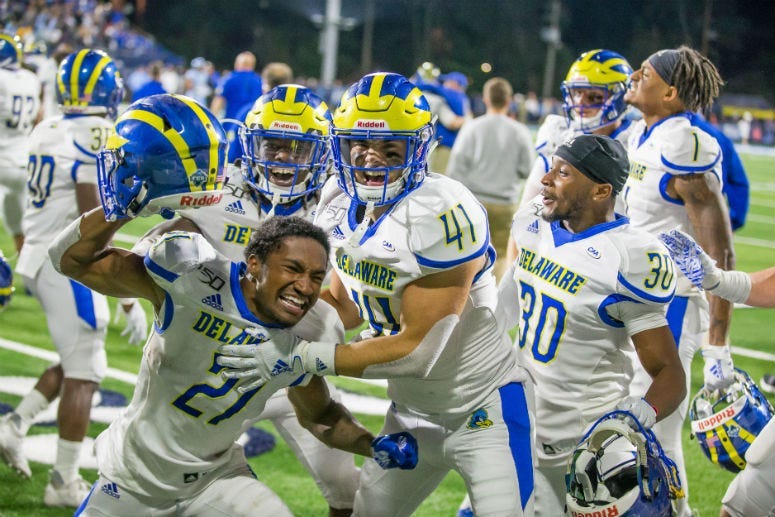 September 11, 2019 09/11/2019 6:43 pm
PHILADELPHIA (KYW Newsradio) — The University of Delaware football team is getting ready for a huge challenge on Saturday when they host the two-time defending FCS National Champions and the current No. 1 team in the nation, North Dakota State University.

The Blue Hens improved to 2-0 this past weekend with a wild 44-36 triple-overtime win at Rhode Island. Delaware rallied from a 13-0 halftime deficit and took the lead for good in the third overtime on a Pat Kehoe touchdown pass to Will Knight.

Delaware head coach Danny Rocco said he learned a lot about his team in the win, which also happened to be the 700th victory in the program's history.

"I learned about the young players on our team and their ability to fight and finish and their conviction," he told KYW Newsradio. "I learned a lot about our leaders, our leadership on our team and just their overall desire to win. There are so many life lessons that you can learn in a game like that and a moment like that. The momentum swings and the emotions and to be able to remain united and be galvanized by this experience is something that I do think is going to help this young team grow and move forward."

And the next step moving forward is this game with the program that dominated in FCS for years in North Dakota State.

The Bison have actually won seven of the last eight national championships.

This will be a big challenge for Delaware.

But it will be in Newark, and after last week's marathon win up in Rhode Island, Rocco said coming home is a big deal.

Last year, these two teams met out in Fargo, with Delaware losing 38-10.

Saturday's game will kick off at noon.