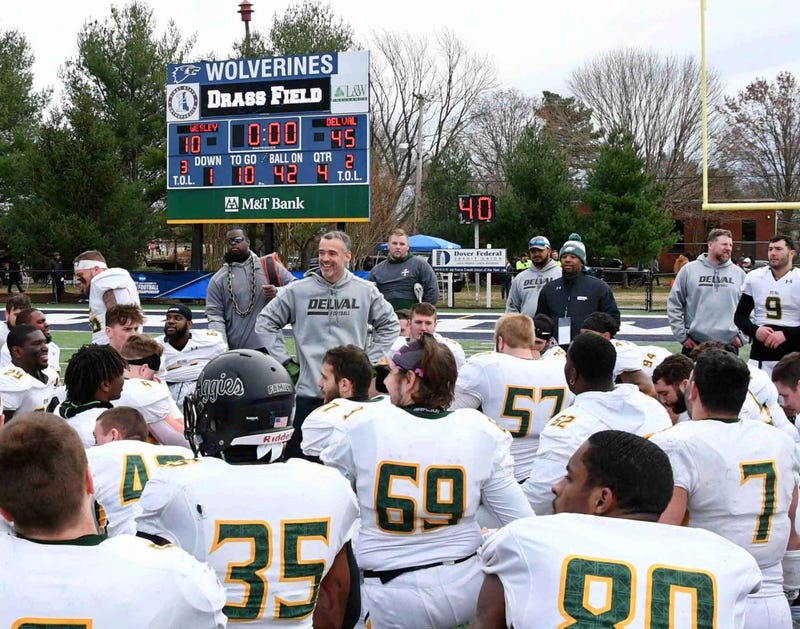 The Aggies are getting ready to visit North Central College in the national quarterfinals on Saturday in Illinois.

DelVal got here by hammering Wesley on the road in the second round this past Saturday, 45-10. This game not only kept the Aggies' season alive, but it also gave them revenge for their only regular season loss. DelVal lost to Wesley back on Sept. 14, 24-18, in four overtimes.

"I'm really proud of our guys," DelVal head coach Duke Greco said. "Wesley's a really good team, but we played our game. It was just great to see the team come together and play like that. Defensively we were sharp and offensively (we were) taking advantage of opportunities, special teams-wise, we were good. It was a great game."

A lot of players, if not every player, stepped up in the win for the Aggies, but it was a truly spectacular day for senior tight end Dan Allen. He caught six passes for 128 yards and three touchdowns, and added a fourth touchdown on the ground.

"Dan's an amazing player," Greco said. "He's got a great work ethic. To see him step up in that moment — he was locked in, he wanted that moment. He's been locked in. I think every week he's getting more and more focused.

"He made some plays — he's a special player, but he just deserves it. Really proud of him."

"Offensively, they are special," Greco noted. "It starts with the quarterback (Broc Rutter). They have a bunch of receivers; offensive line is fantastic. Defensively, they are very good. They are the best we've seen up until this point."

Rutter, a senior, has thrown 47 touchdown passes for the Cardinals this season. He has been intercepted just three times.

Saturday's game in Naperville, Illinois will kick off at 1 p.m. on Saturday.