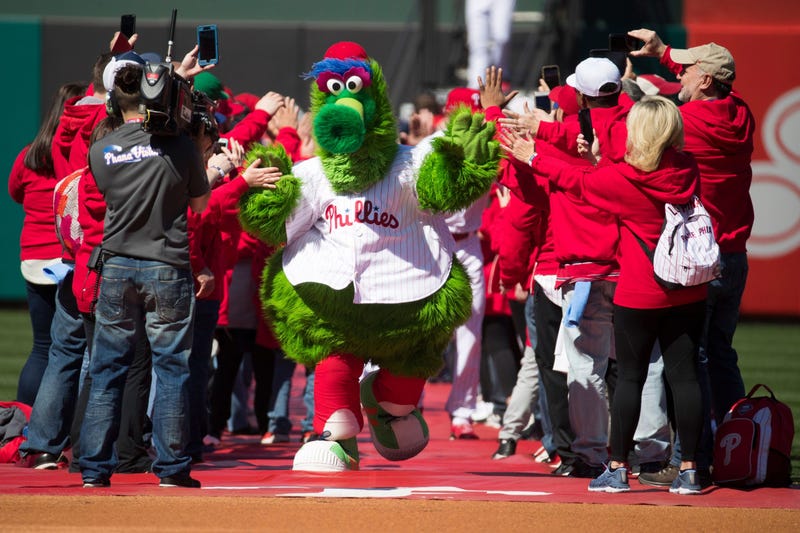 PHILADELPHIA (KYW Newsradio) — While lawyers argue over who owns the copyright to the Phillie Phanatic, the furry mascot unveiled a new look Sunday at spring training.

The ongoing copyright dispute with designers Harrison/Erickson, Inc. kickstarted talk of updating the Phanatic's look, says Tom Burgoyne, the man inside the green fur for the last 32 years.

"Nobody really likes change," Burgoyne said. "I think it kind of kickstarted the discussion. But the fact is, the Phanatic has always changed and evolved over the years," Burgoyne said.

As previously reported, a 1984 agreement with the design firm says the Phillies own the copyright to the Phanatic "forever." But according to a federal suit filed by the Phillies, Harrison/Erickson believes "forever" should end on June 15, 2020, the day before the new season begins, unless their deal is renegotiated.

The latest iteration of the Phanatic has a shorter snout and longer wings, powder-blue tail and eyebrows, blue-and-red socks like those worn by Rich Ashburn's 1948 team — and a larger derriere.

"Generally speaking, if you create something that's based on someone else's work, that's a derivative. And the owner of the work has an exclusive right to create derivatives," Wakiyama said.

"When he came out on the four-wheeler — and always gets a great response. And it really was like: There was no change. The Phanatic is still the same old Phanatic. He's cruising around on his ATV. He was spilling a lot of popcorn yesterday. His bigger butt kind of was getting in the way of some fans."

While the legal fight plays out, Burgoyne says he believes that, over time, fans will see the mascot as the same old Phanatic.