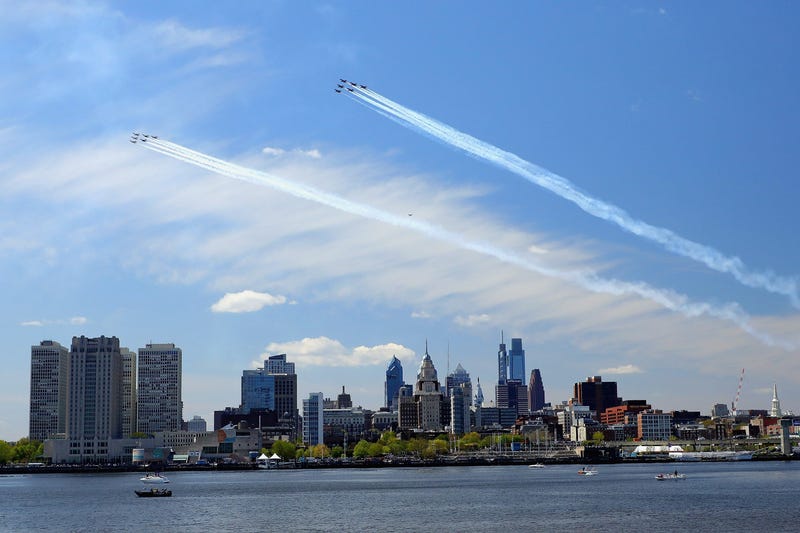 But on Tuesday afternoon, the Philadelphia Museum of Art steps were full of people watching the Thunderbirds and Blue Angels fly over Philadelphia — even though they were urged by the city not to be there.

“Everybody was very friendly,” said Paul Symk, who joined the crowd. “It was a very good mood and people were very excited to see this event. … The jet teams put on a nice demonstration in honor of the front-line workers.”

Museum spectators watched the jets zoom by three different times — the second time was directly overhead. People in South Jersey and the suburbs were also able to see some of the show.

All eyes were on the sky during the 20-minute fly over — and just about all bodies on the steps stayed 6 feet apart.

The city is asking you to stay home to watch today’s #Thunderbirds and #BlueAngels Philly flyover but the Art Museum steps are already filling up with spectators. At least people are spreading out @KYWNewsradio pic.twitter.com/fBzu9dZvrG

Right before the flyover the Art Museum is full of spectators @KYWNewsradio pic.twitter.com/TaPcXMrQdR

“We weren’t sure if we should come down,” said Marge Binsfeld, “but we kept our social distancing and it was totally amazing because they flew right over our heads. My husband had tears in his eyes. It was so patriotic, we loved it.”

Her husband, Dennis, is an Army veteran.

“I felt it was very nice,” he said, “having the show of strength and military passing by giving us a ‘thank you’ for all the first responders. It’s just nice saying thank you, we appreciate you and good luck.”

At one point, a fire truck drove by and everyone on the steps looked down below to applaud.

“I thought it was great to see all the people here, supporting the first responders and police and fire,” added Patrick Piel. “I back the blue, and I’m glad everyone was safe and well-behaved.”

Mayor Jim Kenney was not as happy on Tuesday. During his daily coronavirus briefing, he touched on the crowds at the museum.

“They apparently didn’t listen to me,” he said. “People have to stop being selfish and self-centered.”

On Monday, he asked people to stay home to watch the fly over, and specifically said not to go to any city landmarks.

But residents like Kristie Fox figured the museum would be one of the best possible views of the show, especially since she won’t be seeing another any time soon.

“We were excited because we wouldn’t be able to go to any air shows this year anyway,” said the Air Force fan, donning a Thunderbirds T-shirt, “so to be able to see that here was awesome.”