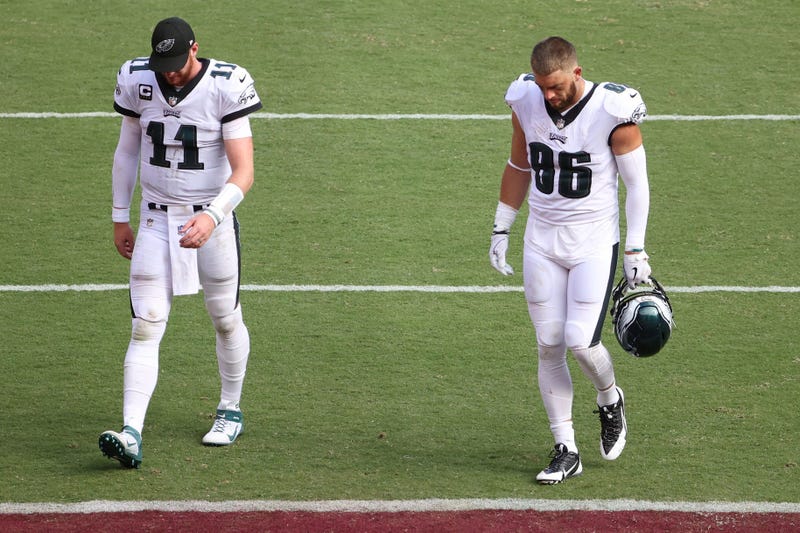 The 27-17 loss was an opener that fans will wish was not so unforgettable.

What brought him to that conclusion?

“Oh, pretty much everything,” Didinger said with a laugh Monday morning. “Where do you begin?”

There was certainly a lot to digest.

The Eagles were dominating offensively and defensively, up 17-0 against what appeared to be an inferior Washington team. Then, after Carson Wentz’s first of two interceptions, everything changed. Washington was able to score a touchdown following the first pick before halftime, and they kept that momentum the rest of the way.

Wentz called it a “tale of two halves,” and that couldn’t have been more accurate. His performance went from brilliant to incredibly inaccurate, in part due to a makeshift offensive line not giving him enough protection.

“You can look at it two ways,” Didinger said. “Is it a complete aberration? I mean, is it just one of those things that just happens? ... Or, is it the indication that this is a more troubled team than anyone realized, and you probably lost a game to the most winnable team on your schedule?"

A question many are asking on this Monday: Who gets more blame: Carson Wentz or Doug Pederson? Didinger said he can’t break the tie, putting it equally on both of them. Didinger believes Wentz’s first turnover was the turning point — when he tried to find rookie wide receiver Jalen Reagor deep in Eagles territory with under two minutes to go before halftime, up 17 points.

Didinger called Pederson’s decision to throw in that moment, when the Eagles had everything under control, “foolhardy.” He says Wentz was a different player after that turnover.

Missing running back Miles Sanders due to injury, the Eagles' pass-to-run ratio was 42 to 17. Some will argue more balance would have made things easier on Wentz and the offensive line.

"We didn't do our best in the run game," Pederson said postgame. "But, I don't necessarily in game know if we're throwing or running."

Didinger said, “It sounded so bad. To most fans who are listening, and even to some degree to me, it makes it sounds like he’s admitting he doesn’t know what he’s doing from play to play — which is alarming.

“Now, I don’t think that’s really true. ... I think what he was trying to say is, ‘I’m not counting from down to down how many runs we have, how many passes we have. I’m not doing the math. I’m just calling the play and the situation that I think is the best play to run in this down and distance situation.’”

To listen to KYW’s full conversation with Ray Didinger, subscribe to the KYW Sports Pod on the RADIO.COM app or wherever you get podcasts. Didinger is a guest of KYW twice a week, the day after Eagles games and the last weekday prior.