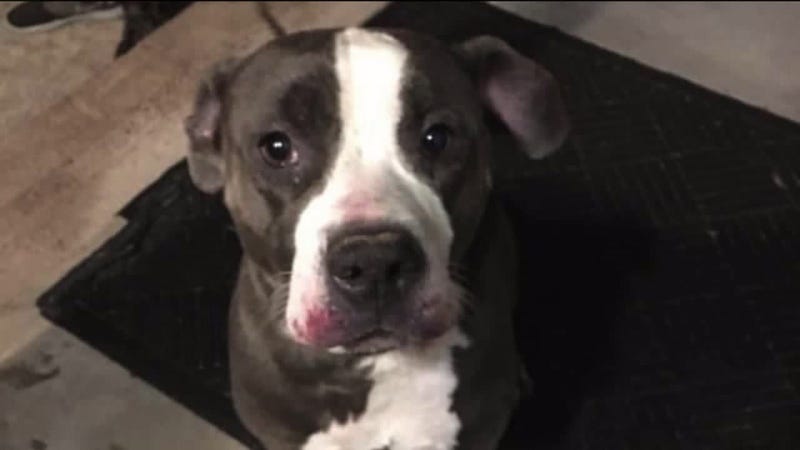 By Chase Senior
HANOVER TOWNSHIP, Pa. (WNEP) — A pit bull mix is in stable condition and improving after being found chained to a tree late last week.

"They just left her here, which is horrible," Virginia Thompson of Hanover Township said.

On Wednesday night, Virginia Thompson and her friends were walking on railroad tracks along Ashley Street in Hanover Township looking for sticks for a bonfire. That's when they came across the 4-year-old pit bull mix, Ellie, who was in dire need of help.

"I seen her eyes, I guess in the moonlight," Thompson said. "They were glistening and I was like, 'Oh my God. It's a dog.'"

Less than 20 feet from the train tracks, Ellie was found chained to the tree. The chain was so taught, Ellie was unable to sit down.

"It's inhumane. It's unfair," Thompson added. "The dog doesn't ask for this life. They just want to be loved and cared for as we do. They bleed the same as us, and they have feelings and emotions and a heart, so why do that to them? It's not fair. It's like you're abandoning a child."

Thompson and her friends unchained Ellie from the tree then took her back home and fed her before driving her to an animal hospital. After spending the night there, Ellie was taken to the Luzerne County SPCA. An employee there tells us Ellie has several health issues including mange, so she's isolated and we were unable to see her. It could take a couple months for her health to build up before she's up for adoption.

"I can't even understand why anybody would want to get rid of her," Thompson said. "She didn't growl, bark, bite or nothing. She laid in the back of my truck all the way to the hospital."

Employees at the animal hospital told Thompson if they didn't find Ellie, she might not have made it through the night. A fundraising page has been started to raise money for Ellie's medical expenses.

"We're raising money for her medical expenses to ensure that she gets the best treatment needed," Ashleigh Manseau of Wilkes-Barre said. "We're going to donate directly to the SPCA and say whatever you need out of this for medical expenses and then whatever else left would be for the SPCA."

The SPCA tells us as of right now, it's not being treated as a cruelty case because there are no leads as to who, if anyone, owned Ellie.