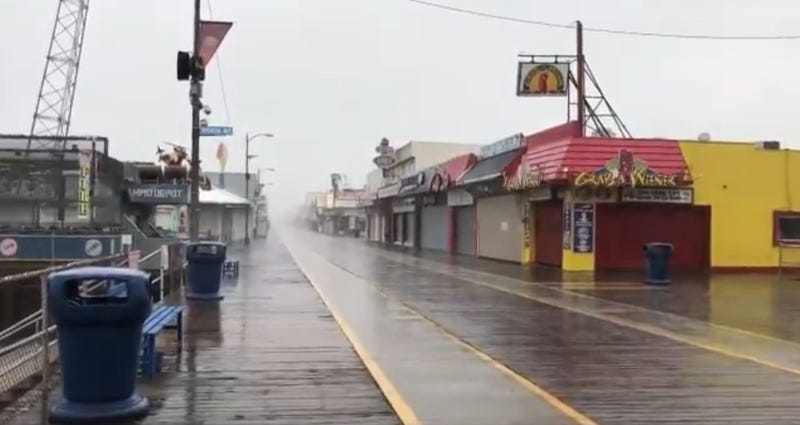 It was a mostly quiet morning on the boardwalk. First, it was just the wind. On the drive into Wildwood, the flags were rattling and the street lights were swinging.

Then the rain picked up and there were fewer people out for a run, bike ride or walk.

But Kim, a Wildwood resident, was out on the boards. She isn’t going anywhere.

"It's not so bad. It's nice for getting out. It's not too hot," she said. "I enjoy coming out and seeing how the ocean's ripping and roaring in the different types of weather, so it's just liquid sunshine," she said.

For Nancy Moore, from Dover, Del., the winds whipping and the rain pouring in Wildwood means she will be spending much of the day indoors at a different shore town.

"I think we're gonna ride over by Atlantic City," she said. "We haven’t been there. So, we’re gonna take a ride over there, a couple stores we’re gonna visit."

"I think we’re going to be really lucky about Dorian, and it’s sad that it came when it did for the other states and also the Bahamas," she said.

However, Wildwood and Cape May County officials say they’re keeping a close eye on flooding and the possibility that the strong wind knocks out power.

The good news — especially since a lot of people are in town for a "Roar to the Shore" motorcycle event — is that the stormy weather is expected to be out of here this weekend.