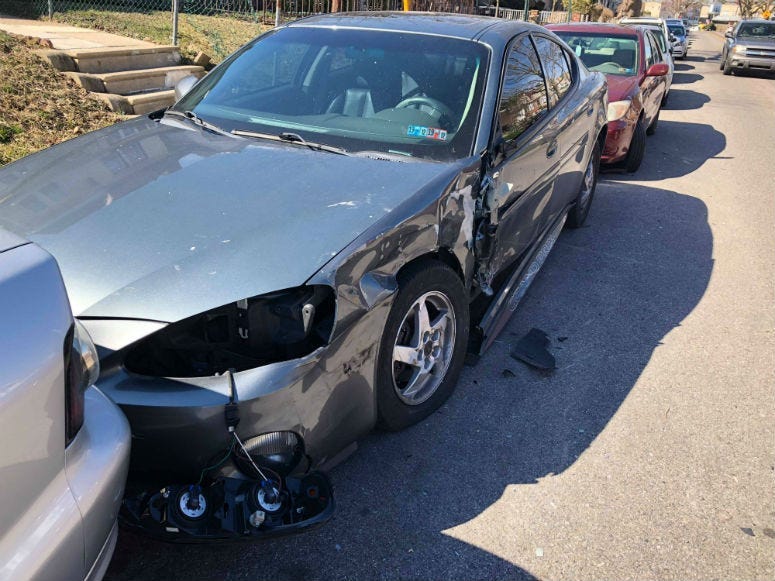 PHILADELPHIA (KYW Newsradio) — Imagine waking up and walking outside to find your parked car with the side smashed in, headlights broken, and the mirror on the ground. That's what happened to several neighbors in West Oak Lane Sunday morning.

"I was right here in the living room by the window and you hear a car, you hear it start to speed up and then you just hear 'boom boom boom,'" said resident Jasmine Avery, describing the sound of a driver who slammed into eight parked cars at the 2400 block of 79th Avenue.

"He pulled his badge out, got out the car, so she thought that he was a cop. He was smoking cigarettes, pacing, sweating and eating sunflower seeds," Scott said.

He turned out not to be a cop, but actually a security guard for a night club. The driver wasn't arrested.

Neighbors say this is more than an inconvenience; its a recurring problem.

Something similar to this happened a few weeks before.

"Same thing, people flying down the block and four cars got hit. Mine was one of them," said Scott said.

Now, Karen Smith and other neighbors say they want the city to act because people ignore the 25 mph speed limit.

"We need speed bumps on this block. Ya see how fast they driving, I mean it's like a highway," Smith said.