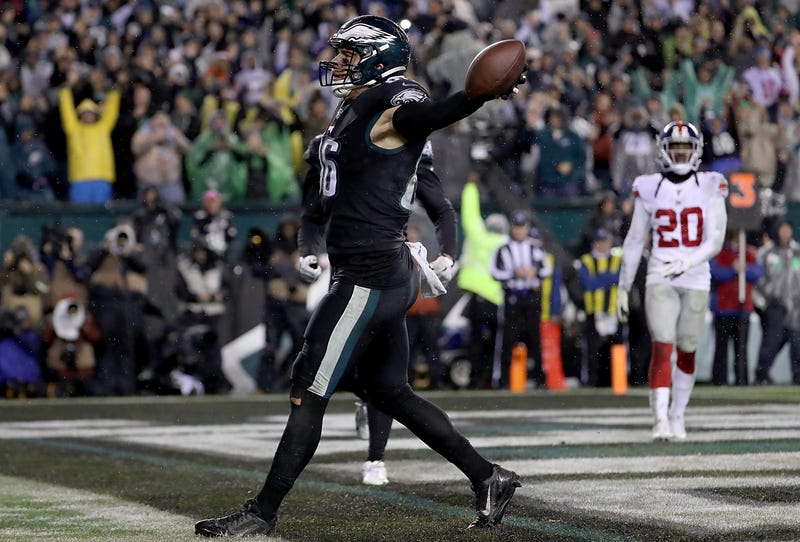 On Dec. 22 at Lincoln Financial Field, the Eagles and Cowboys will battle in a game that could decide the NFC East title.

Before the two longtime rivals clash, the Eagles have a game in Washington Sunday, while Dallas will play host to the Rams. It is possible the slumping Cowboys could lose to Los Angeles while the Eagles take care of business against the 3-10 Redskins, giving the Eagles an opportunity to clinch the division with a win over the Cowboys the following week.

But the Eagles can't look past anybody. Tight end Zach Ertz and his teammates know the stakes are too high.

"We've got a huge one this week," said Ertz. "This is another must-win game for us. The rest of the season is going to be must-win games for us. That's the mentality we all have."

There are two reasons why the Eagles are clinging to that must-win mentality: First, the urgency of the battle to get in the postseason. Second: what has transpired the last two games.

The games against the Dolphins and Giants seemed like two easy victories, but the Eagles lost in Miami and needed overtime to beat New York. Ertz and his teammates have no reason to look past the Redskins, and Ertz said Washington's defensive linemen and linebackers present plenty of problems for the offense.

"They have a really good front seven," Ertz noted. "That's one of the toughest front sevens in the league. They've been that way for a long time. They've got a lot of big first-round picks in that front seven. It's always been kind of a struggle to run the ball against them."

If the Eagles are to continue with their playoff run, their back-up players must continue to make an impact on offense. With several skill players lost for the season, the likes of Boston Scott, Greg Ward and Josh Perkins have all made key contributions.

"We're excited for our young players who have been coached along the way," said Pederson. "We know they've been coached the right way; they're focused on their fundamentals, the details of their job. A lot of times with these young players, they just need the opportunity."

The opportunity remains for the Eagles with three games remaining. While the former practice squad players have been impressive, several veterans such as Ertz have also needed to step up their game.

Ertz always gets plenty of attention from opposing defenses, but the loss of offensive weapons such as DeSean Jackson and Alshon Jeffery have made things even more difficult for Ertz.

But for the veteran, it comes down to wins and losses, not the stat sheet.

"It's kind of been a roller coaster," Ertz admitted. "I don't really view individual success. Right now, at this point of the year, I just view it as team success. We're 6-7, not exactly where I thought where we'd be."