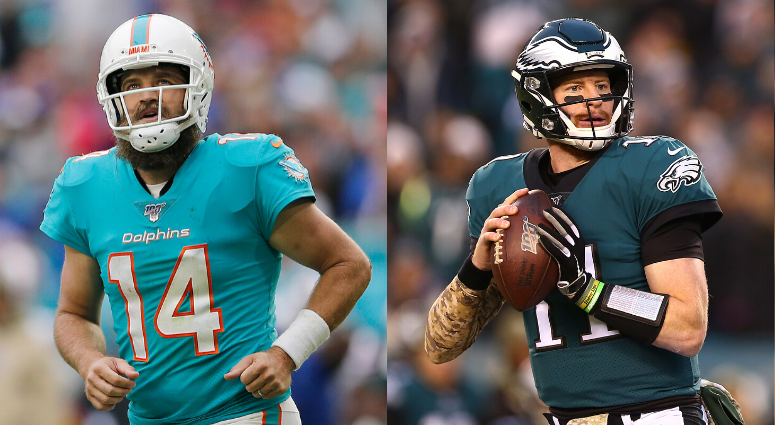 PHILADELPHIA (KYW Newsradio) — Thanksgiving dinner was a bit more enjoyable for the Eagles and their fans.

While the turkey and stuffing was being passed around the dinner table on Thursday, the Buffalo Bills were beating the Dallas Cowboys at AT&T Stadium. The loss by the Cowboys gives the Eagles a chance to move into a first-place tie in the NFC East, if they win in Miami on Sunday.

The Eagles already controlled their own destiny before the Dallas loss, but they can now clinch the division by winning their next four games.

Just don't ask Doug Pederson and his players about the standings — they insist they are only focused on winning this weekend in South Florida.

"The messaging is we're just trying to go 1-0 this week," said Pederson. "We're focused on Miami and trying to win this football game. We can't control anything outside of that. I don't like to use that as a message or an inspiration or a motivation for this team. We've just got to continue to improve and try to get this game."

Improvement is likely for the Eagles on Sunday. After struggling on offense against New England and Seattle, the Eagles will face a Miami squad that is 2-9 on the season.

While the Eagles look to get back on track offensively, the defense will face a Miami attack that is near the bottom of the NFL. The Dolphins' offense is ranked 30th in the league, but players like Brandon Graham know veteran quarterback Ryan Fitzpatrick can still make plays despite having a limited supporting cast.

Last year, Fitzpatrick lit up the Eagles while on another Florida team. During a loss by the Eagles in Tampa last season, Fitzpatrick threw for 402 yards and four touchdowns. Fitzpatrick has played for eight different teams in his career but continues to find a way to earn a starting spot in the NFL.

"He's a competitor," Pederson added. "I love watching him play. He doesn't care. He's going to try to put the ball in tight windows and he's going to lead probably more by example, but a lot of respect for him, a lot like QB Josh McCown with us. These guys that continue to play and play at a high level and help their teams win — I have a lot of respect for those guys."

Pederson needs his quarterback to play at a higher level than in recent weeks. Carson Wentz had perhaps the worst game of his NFL career Sunday against Seattle.

However, Pederson said his quarterback remains confident as he continues to focus at practice and block out distractions from the outside.

"He just continues to work every day," Pederson said. "He doesn't let that affect him mentally. He continues to work in practice and work with his guys. He's been great in the meetings. As they say sometimes, iron can sharpen iron. This is one of those situations where he just gets sharper. He lasers in, focuses on his job and helping our team win."

The NFL changes on a week-to-week basis. The Eagles were left for dead last year in late November but rallied to reach the post-season.

After a difficult stretch in their schedule, the table is set for the Eagles to make a run. For now, the added bonus of the Cowboys' struggles is helping, but the Eagles have their minds on Miami with their Dec. 22 showdown against Dallas well off the radar.