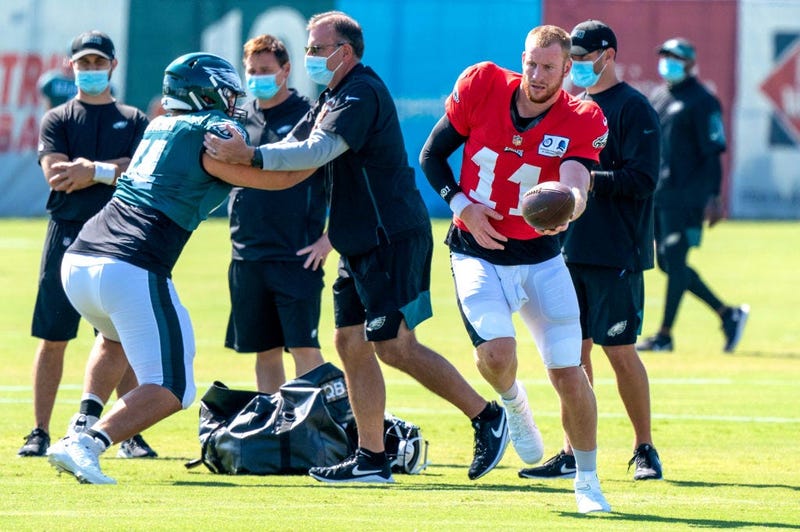 PHILADELPHIA (KYW Newsradio) — For several days, Doug Pederson assured everybody that Carson Wentz's injury was a minor one. It was no surprise that Wentz was back on the field on Monday.

The Eagles quarterback returned to practice after dealing with a groin injury, and the coaches decided to play it safe last week by giving Wentz the week off from practice.  Now, Wentz says he will be at full speed when the Eagles kick off their season in Washington on Sunday.

"I feel great now," said Wentz. "I had a little groin tightness and it was just a really good week to kind of just let it rest and take care of myself off the field. I was out there today practicing, feeling great, so that will be behind me for sure."

Wentz had a familiar face lined up at left tackle in practice.

Jason Peters returned to his old position after spending the summer at right guard, and a season-ending injury to Andre Dillard created a vacancy at the left tackle spot.

After speculation about his willingness to move back to tackle, Peters came into Pederson's office on Monday and said he was ready to make the switch.

"This is who he is," Pederson said.  "He sacrifices not only his body, but for the football team. He did an outstanding job for us at right guard.”

If Peters had stayed at right guard, someone with far less experience would have been protecting Wentz's blindside.

It was understandable that the quarterback was happy to see Peters back at the left tackle spot with the regular season opener less than a week away.

"I'm excited about it for him and this team," said Wentz. "I've had JP back there blocking my blindside pretty much every year. He's been the guy out there and done a great job.  We call him the bodyguard for a reason."

Now that Wentz is back at practice and the left tackle spot has been settled, the Eagles can focus on Sunday's season opener in Washington.

The hope is it will be the first of 16 straight games uninterrupted. So far, the safety precautions put in place by the NFL have worked well enough to get the season started as scheduled.

It is now up to the players and coaches to continue to follow the guidelines as the U.S. continues to deal with the pandemic.

"My hat's off to our players and the NFL in general for the protocols that have been put in place," Pederson said. "It's our job now during the regular season to maintain this, and the players are all on board with it.”