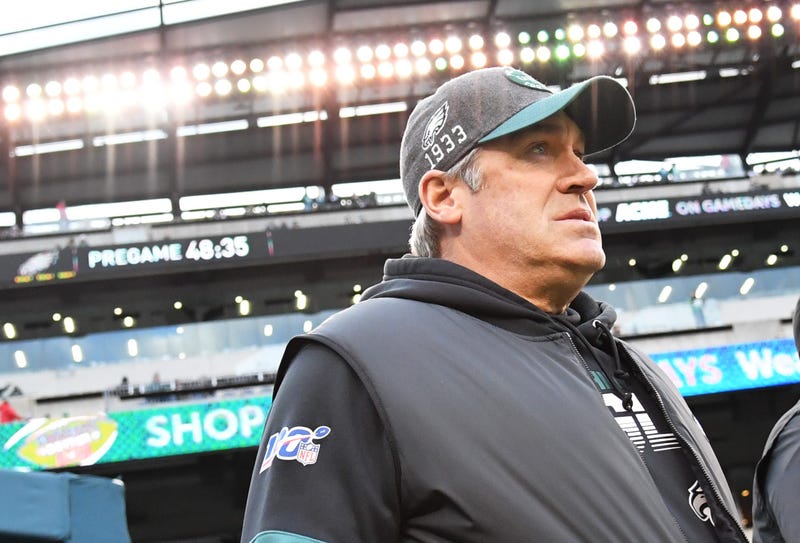 PHILADELPHIA (KYW Newsradio) — The Eagles dealt with plenty of drama this season, but one thing was made perfectly clear: There is no denying who is the captain of the ship.

This was Doug Pederson's fourth year as head coach of the Eagles. Two years ago, he led his team to the Super Bowl. Last year, the Eagles were counted out, but rallied to reach the second round.

This season featured everything from a mountain of injuries to an ex-player questioning the culture in the locker room. The Eagles still managed to win the NFC East and despite falling in the first round, the Eagles believe they can get right back into contention in 2020.

Brandon Graham and his teammates pointed to their head coach when asked why the Eagles were able to keep their focus in a season that could have easily blown apart.

“Doug has this team,” Graham said. “Everybody loves Doug and loves the schedule that we run on. He's a players' coach. When you've got a players' coach, it's give and take. I think Doug does a great job of give and take and always keeping us steady — not too high and not too low. He checks us when we're supposed to be checked and praises us when we're supposed to be praised.”

Winning and losing ultimately decides the fate of a coach in the NFL, but having the pulse of your players also goes a long way. Like Graham said, a coach has to know when to hold ‘em and when to fold ‘em.

Players praise Pederson as a players' coach but also often remind the outside world that their head coach can get quite tough when needed. That balance has earned the trust and respect of players like Brandon Brooks.

“Doug's a tremendous coach and person,” Brooks said. “He's been a player as well, so he understands what we go through each and every day. He has a really good pulse on the team as far as if guys are hurting today or if guys need to be chewed out a little bit. Doug has a good pulse on that, and guys really respect coaches who listen to them when there is an issue.”

There will be changes in the off-season. While the Eagles will say goodbye to several players, they will also be welcoming new ones. Anyone coming into the Eagles nest for the first time will be introduced to the culture built by Pederson over the last four years. It is a culture that has firmly entrenched Pederson as the man in charge, and his players will continue to follow his lead.

Zach Ertz said the culture created by Pederson is clear in Philadelphia.

“It's about a group that comes to work each and every day,” said Ertz. “They bust their butts each and every day and find a way to improve. It really embraces the grind of not only the day-to-day process, but of the entire season. I feel like if you're a guy that commits to that and commits to the team, you're going to be here for a long time.”

Pederson is the only coach in the division who is returning next year. The Cowboys, Giants and Redskins have all made changes, and that will likely be another reason the Eagles should be favored to repeat as NFC East champions.

Ron Rivera has had his share of success, but it will take time for a culture change in Washington. Mike McCarthy will face the same challenge in Dallas after the Cowboys disintegrated at the end of the season. The Giants are still looking for Pat Shurmur's replacement, but they are coming off a 4-12 campaign.

“He just stays himself,” Fletcher Cox added. “He doesn't overreact or freak out. He lets this team knows how he's feeling, what's on his mind and what this team needs to do to get back on track. Everybody believed that. It says a lot when you've got a group of grown men that believes in your head coach the way we believe in Doug and respect him so much.”