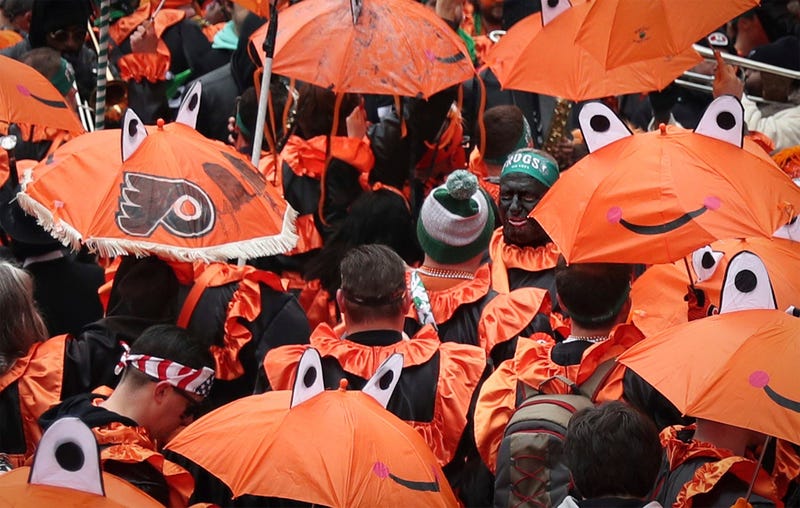 January 2, 2020 01/02/2020 10:00 pm
PHILADELPHIA (KYW Newsradio) — The men who wore blackface during Wednesday's Mummers Parade have been expelled and banned from future mummers events. But the controversy has sparked renewed calls to end the annual tradition, including from a former mummer, who says he quit because of the history behind it all.

"My family had a fife and drum band when I was a kid, so I was born into the Mummers," 40-year-old Michael Passio recalled. He dressed up for years, participating in the Mummers Parade.

But five years ago, he said, he got a divorce and began traveling the world and studying the history behind the 120-year-old tradition.

"Something just didn't sit right with me," he said, "and every year with the blackface."

The parade's record of racist parody emerged again this year when a couple of Mummers from the Froggy Carr brigade in the wenches division were seen wearing blackface.

The club chose a Gritty theme this year, for which many of the marchers wore variations of face paint in the Flyers' colors of black, orange and white. But the two men cited appeared to have just blackface.

The men, Kevin Kinkel and Mike Tomaszewski, defended their decision and said it wasn't racist.

Kinkel told NBC10 that he wore blackface as a tribute to a friend who died who used to do the same.

“I talk to black people. They told me, 'What are you talking about? You can wear whatever you want. That ain’t discriminating me. That ain’t racist to me,' ” he said. “That’s what they tell me.”

Tomaszewski said he wore blackface because he likes it.

One of the two men who wore blackface at the Mummers Parade told me that a small group of them originally wanted to honor Kate Smith. The majority of the group thought it was “too controversial.” https://t.co/Z13szAVSLT pic.twitter.com/Vlwt3Ym5C1

At the 2019 New Year’s Day tradition, one skit received immediate backlash for featuring a caricature of Jay-Z walking a mummer dressed as a long-nosed Mayor Jim Kenney on all fours. In 2016, the parade made headlines for insensitive jokes regarding Caitlyn Jenner’s transition.

The Froggy Carr club was disqualified on Wednesday for violating a long-standing ban on wearing blackface in the parade. Kenney called the incident "abhorrent and unacceptable."

The use of blackface by someone affiliated with Froggy Carr today was abhorrent and unacceptable. This selfish, hateful behavior has no place in the Mummers, or the city itself. We must be better than this. The group was disqualified and we will be exploring additional penalties.

When Passio saw that, he felt reassured that he made the right decision to leave the tradition years ago.

"It's immature, it's embarrassing, it's old — it shouldn’t be done," he said.

He noted, however, that there are many good, hardworking people who participate in the Mummers Parade, but more education needs to take place so that instances of blackface are stopped completely.

Although Passio has lost friends for his opinions, he hopes he’ll gain some new ones, as more parade participants put the emphasis on the satire — minus the racism.

"People should be educated to the history of it, and I think things should be changed," he said.

That same history is why entrepreneur and Little Giant Creative founder Tayyib Smith wrote an op-ed titled "The Mummers Can't Be Saved," arguing that given the racist history of the tradition, the city should end it altogether.

"The Mummers are not in alliance with where the city needs to be," Smith said. "It's an international embarrassment and a stain on the contemporary reputation of the city."

A former police officer, Mikhail Harrison of Vote Reparations, is planning a protest against the Mummers on Friday.

Their focus is on sponsors of the event.

KYW Newsradio's Rachel Kurland and the Associated Press contributed to this report.