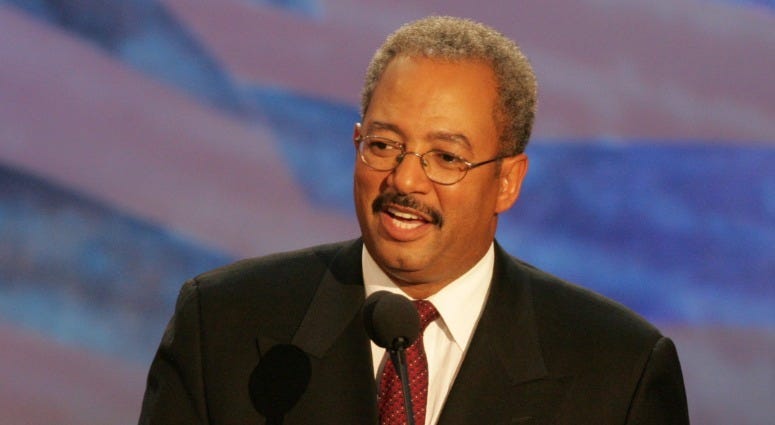 PHILADELPHIA (KYW Newsradio) — Disgraced former congressman Chaka Fattah Sr. has been sentenced again to 10 years in prison for various charges, including racketeering, bribery, conspiracy and fraud.
Fattah, 62, has served two and a half years of the sentence. His lawyers said the time should be reduced, because four bribery and money laundering counts had been thrown out on appeal.

#BREAKING: Former Congressman Chaka Fattah is once again sentenced to a decade in prison on corruption charges, after appeals court overturned a few convictions. He gave a heartfelt apology to court & public, spoke of his mentoring & teaching programs in prison. @KYWNewsradio

Federal prosecutors said he should still serve his original sentence on the corruption-related counts that remain.

After a monthlong trial in 2016, a jury found that he and various co-defendants schemed to hide funds from donors and misspent federal grants and nonprofit funds for personal use.

In the courtroom on Friday, Fattah offered a heartfelt apology to the public, saying he let people down and hurt people.

"I am deeply sorry for them. I have done things that are wrong," he said.

Dressed in an olive-green jumpsuit, the former Philadelphia congressman addressed Judge Harvey Bartlett with a sympathetic reflection about his conviction and how he understands the impact his actions have had. He siad he accepts responsiblity, and that he will do better.

His defense team pointed to letters from other inmates about good works he was doing behind bars.

"I have taught courses. I have tutored students. I have mentored and, in a lot of cases, just been a sounding board. But moreover, I have spent some time thinking about my own life, and the decisions I have made, and the impact they have had. And I have taken responsibility for making some very bad choices," Fattah said.

"I understand that I have let people down, and I have hurt people," he continued. "Obviously, I can't go back and change them now, all I can do, and what I am doing, and what I will continue to do is to try to be better in a different way. And I start that by taking responsibility in this matter."

After some discussion about whether to re-sentence the 62-year-old on all the charges or just the ones appealed, the judge gave him 10 years behind bars, with the same restitution as before: $614,000.

Fattah is set to be released in October 2025.