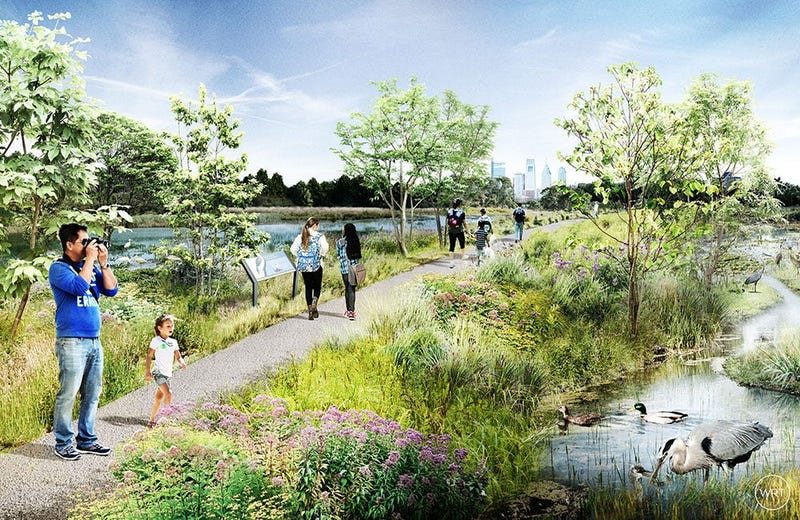 November 24, 2019 11/24/2019 4:42 pm
PHILADELPHIA (KYW Newsradio) — Philadelphia's Office of Parks and Recreation is moving ahead on what it calls a master plan for FDR Park, starting with an effort to raise $15 million for the first phase of the project.

"This really helps get the project started," said Parks and Recreation Commissioner Kathryn Ott Lovell, celebrating a $250,000 grant her department received from Harrisburg this past week. It's a drop in the bucket when you compare it to the overall $200 million estimated pricetag for this massive makeover, but it is a start.

She said the money will go toward designing first phase projects such as a gateway plaza at Broad and Pattison, "where you can really see the park as you come off the subway or as you drive down Broad Street, so a beautiful welcoming space that will be a grand gesture into the park."

Lovell also shared other plans for the space, for instance a great lawn that would run along Broad Street.

"We're gonna create a great lawn, maybe a 15 acre great lawn which would run along Broad Street. We're gonna create two new destination play spaces so not your average everyday playground but playgrounds that you might find in New York or Chicago that are designed by world-renowned play architects."

And that's not all. Lovell said the department is partnering with Philadelphia International Airport to build 40 acres of wetlands including a nature trail. A flood prevention system has also been planned, raising parts of the park above ground water. Parks and Recreation also plans to build a dozen artifical turf athletic fields and reopen the lakes for recreational boating. It will take at least five years to complete the ambitious master plan, which took nine months in itself to devise.