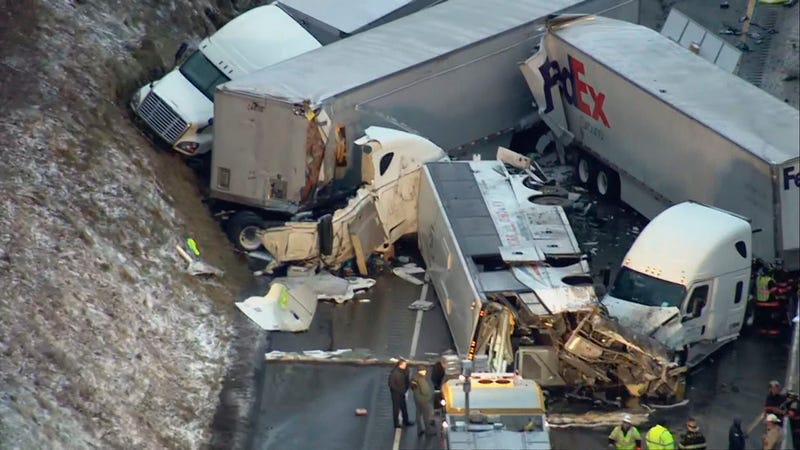 PHILADELPHIA (KYW Newsradio) — Federal authorities have joined the investigation into the deadly chain reaction crash on the Pennsylvania Turnpike during the pre-dawn hours Sunday.

Five people died and 60 were hurt in the accident, which involved a tour bus loaded with passengers heading for Cincinnati.

Kehler and Kepner were driving together in a tractor-trailer out of Harrisburg, UPS spokeswoman Kristen Petrella said

He says the driver apparently lost control of the bus loaded with 56 passengers.

Photos from the scene show a mangled collision of multiple vehicles including a smashed FedEx truck that left packages sprawled along the highway.

KDKA-TV out of Pittsburgh says eyewitnesses told investigators that the bus was going at a high speed just before the crash.

The bus is owned by Z & D Tours out of Rockaway, N.J., which runs daily, low-cost trips from New York's Chinatown to destinations in Ohio and Kentucky.

KDKA also spoke with one of the bus passengers, Georgie Coverdice, who described the chaos after the crash.

"Basically all the passengers started running out, trampling each other," Coverdice said. "There's a woman that fell in front, and there was this guy like climbing over the chairs and stepping on her try to get out of the bus, thinking it was going to explode."

Eastbound and westbound lanes of the Pennsylvania Turnpike turnpike were closed between New Stanton and Breezewood for most of the day Sunday. The road finally reopened to traffic at 6:30 p.m.

The National Transportation Safety Board has a team on the scene and hopes to recover a data recorder from the bus, similar to black boxes on passenger jets.

Data on the device could provide some clues as to what happened to the bus just before the crash.