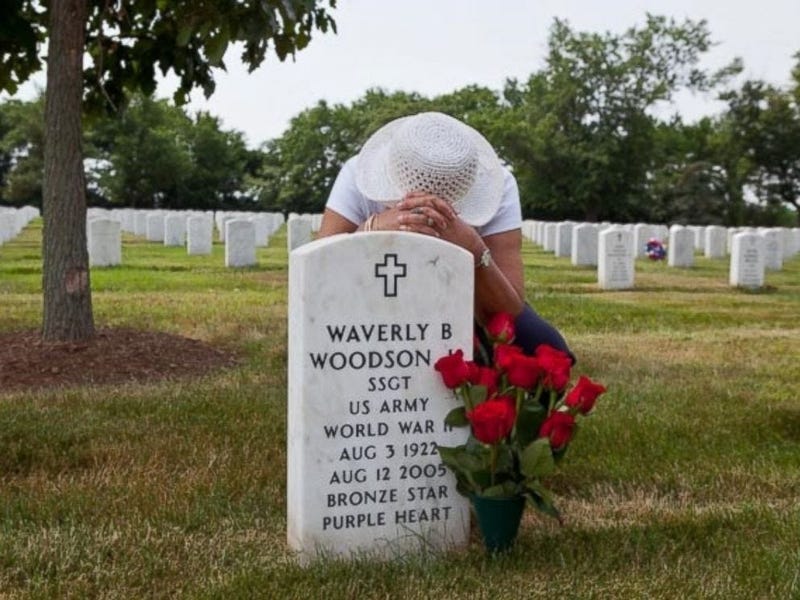 PHILADELPHIA (KYW Newsradio) — There used to be a prevailing myth that no black men participated in D-Day — by far one of the most important days of World War II.

But a closer look reveals that some African-American soldiers played a key role on Omaha Beach, and their stories still remain largely untold.

"There were no (Congressional) Medals (of Honor) given to any black soldiers for what they did at D-Day," said 90-year-old Joann Snowden Woodson. "People really need to know the truth.”

Woodson has been on a consistent mission to share the truth of D-Day with the world, as well as the service of her late husband, Waverly Bernard Woodson — one of the few black soldiers known to have served on Omaha Beach that fateful day.

Originally from West Philadelphia, Waverly Woodson was a member of the 320th Barrage Balloon Battalion, an all-black Army unit that specialized in placing barrage balloons in battle areas during World War II. Their goal was to distract and destroy enemy aircraft and provide cover for Allied soldiers on the ground.

Waverly Woodson and his Battalion left England on June 5, 1944. They arrived on the beach in Normandy via transport boat the next day.

"He said he could see the soldiers being picked off just like flies," Joann Woodson reiterated. "Some of them were dead; some of them he had to administer the last rites. And some of them — I think he said he had to do amputations and everything."

Waverly Woodson died in 2005, but Joann Woodson was there when he provided testimony before Congress years prior. She recalled her husband's many stories of that day.

At 21, he was one of a handful of medics who tended to the wounded under enemy fire. Waverly Woodson's leg and buttocks were sliced by shrapnel, but he worked through the pain, saving lives on the shore.

Waverly Woodson collapsed from exhaustion 30 hours after landing on Omaha Beach. He earned a Purple Heart and Bronze Star for his service.

He was nominated for the Congressional Medal of Honor in the ’40s, but no black soldiers received such high recognition at the time. Then, records of his service, along with those of millions of other soldiers, were destroyed in a fire in 1973.

The memo was discovered by Linda Hervieux, author of “Forgotten: The Untold Story of D-Day's Black Heroes, at Home and at War.”

"People sometimes don't want to believe that it actually happened, but it did," added Joann Woodson.

Fighting a war while battling racism

"It was terrible,” said 97-year-old William H. Thompson. “We could tell what was happening because when those planes went over on D-Day, they covered the sky.”

But the war was only part of the battle for black soldiers fighting during World War II. In addition to fighting Germans, Thompson said there were many battles with white American soldiers, who brought their racism all the way to Europe.

"We had a lot of trouble, but we overcame it," Thompson said.

Nearly 1 million African-Americans served in World War II. Black soldiers reported frequent harassment, and they were repeatedly accused of crimes while in Europe, especially if they got involved with European women.

Serving in segregated units, black soldiers worked in support roles such as drivers, engineers, or combat support roles like medics.

But as the years passed and casualties mounted, black soldiers like Thompson got the opportunity to enter combat.

"They didn't want us to succeed, but we succeeded anyhow," he said.

Campaigning for credit and truth

The French government honored Waverly Woodson for his service during the 50th anniversary of D-Day in 1994. Of those first seven black men honored with the Medal of Honor in the U.S., none had been on Omaha Beach like Waverly Woodson.

"We are still hopeful Waverly will get that honor," Thompson said. “You are almost in tears when you read what he did."

Efforts to build momentum for Waverly Woodson have waxed and waned over the years. Thompson is hopeful that with all the attention surrounding the 75th anniversary of D-Day, he may finally get his medal.

"We are hopeful there will be a change of heart and that the Congressional Black Caucus will get together and give this man his due — what he deserves," he added.

Joann Woodson hopes the love of her life will get posthumous recognition while she's still alive. The Woodson family recently launched a petition, requesting President Donald Trump to award him the medal. It only needs less than 100 more signatures.

"He deserves it, he really does," she said.

After Allied forces stormed the beaches of Normandy in France on D-Day, supplying the troops became critical to their push into France.

With railroads destroyed, a convoy of trucks was established, and helming the dangerous effort were heroic black soldiers.

Nicknamed for the red meatball painted on the side of the trucks, the Red Ball Express was a 6,000-vehicle fleet that transported 12,000 tons of food, ammo and supplies per day from Normandy to the German border, beginning in August 1944.

The 82-day effort was critical to the advancement of Allied troops in their invasion of Europe after D-Day.

"Three out of four of the drivers were African-American men," said Joseph Geeter, a retired Marine, who is the current president of the Philadelphia chapter of the Montford Point Marine Association.

Geeter has researched the effort extensively since 1978, after the death of his grandfather, Ralph Nicholas Piper. A World War II veteran, Piper rose to sergeant in the Army and served in the all-black 57th Ordnance Company, which arrived a few days after D-Day.

Like many black soldiers from a variety of segregated units, Piper was eventually assigned to the Red Ball Express as a driver. According to Geeter, records show his grandfather took the 700-mile, 54-hour trek, where only one in 10 trucks were expected to make it through.

"There were people shooting at them from both sides or trying to blow up the trucks," added Geeter.

According to military history records, the road was dangerous and riddled with debris, in some cases, requiring drivers to maneuver over barbed wire and shell fragments in near-blackout conditions.

"They would have to drive with a certain speed, with the lights out or a sliver of tape over the headlights, just to see what was in front of you," Geeter said. "Those men knew what they were doing, and every trip was a life-or-death situation."

Righting the wrong in the media and beyond

While Red Ball Express drivers' harrowing journeys were critical to the Army's effort, their contributions — specifically those of African-Americans — have been largely ignored during the war and beyond.

"But it's important to note that someone had to do this work," he added. "The upside to all that is that these men were able to get skills they would never get during jobs in civilian life."

Black soldiers serving in non-combat roles learned how to be long-haul truck drivers or lay telecommunications cables, among other essential technical skills.

"The job wasn't one of the glamorous jobs that people make movies about, but it was necessary," Cooke explained. "And in war, those in combat get all the glory, and — rightly so — the attention should be focused on them."

However, some black soldiers, like Thompson, did fight in combat, yet their contributions to the war effort were largely left out of news media. Even modern films about D-Day, like "Saving Private Ryan," fail to give African-Americans full credit for their service, Cooke said.

"(Steven) Spielberg acknowledged that there were black folks there, but what puzzled me about that film is you're going to acknowledge them, but literally, if you blink, you'd miss them," he said.

Many African-American World War II veterans criticized that film and others, and, have lobbied for more equal representation in historic depictions of the war.

"Part of it is in line with what American history and culture has been," he continued, "which is to devalue African-American contributions to this nation and to the common history that we all share."

Cooke has been working to change that narrative, creating films that uncover the forgotten contributions of black people during World War II.

His latest piece, “Invisible Warriors: African American Women in World War II,” tells the story of the 600,000 black women who went to work to help with the domestic war effort.

Like Cooke, Geeter spends his days making sure that men like his grandfather are included in these historical accounts.