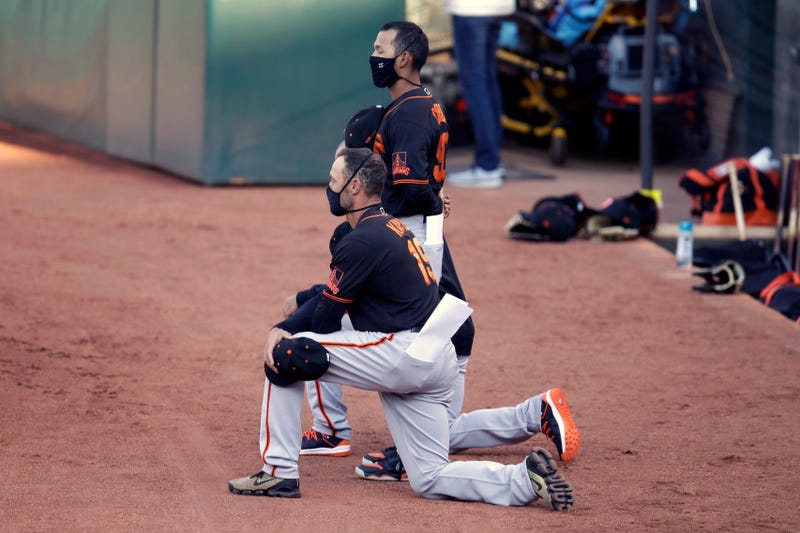 "I wanted them to know I wasn’t pleased how our country has handled police brutality. I told them I wanted to amplify their voices & amplify the voice of the Black community & marginalized communities as well.''Gabe Kapler on decision to kneel during national anthem. #SFGiants pic.twitter.com/zsDJt58OqP

In addition to Kapler, right fielder Jaylin Davis, who is African American, and first base coach Antoan Richardson, who is Black and from the Bahamas, kneeled as well. Shortstop Brandon Crawford put a hand on each of their shoulders. Davis held his right hand over his heart. Austin Slater and Mike Yastrzemski kneeled as well.

Kapler said their coaching staff and players had a lot of discussions about the anthem in the prior 72 hours. He also shared that a lot of them reached out to people in other organizations about how they could help.

The former Phils manager said he told his players on Monday that the Giants' coaching staff and organization would not pass any judgement for the decision they made, whether it be kneeling or standing.

“I wanted them to feel safe in speaking up, and so we had these kind of discussions for the last several days,” he said.

Kapler said those discussions will continue.

While President Donald Trump didn’t directly mention Kapler in a Tuesday morning Tweet, he again posted his displeasure with kneeling during the anthem.

Looking forward to live sports, but any time I witness a player kneeling during the National Anthem, a sign of great disrespect for our Country and our Flag, the game is over for me!

Giants President of Baseball Operations Farhan Zaidi released a statement saying, in part, “We’re proud of our players and staff for continuing to participate in the national conversation about racial injustice.”