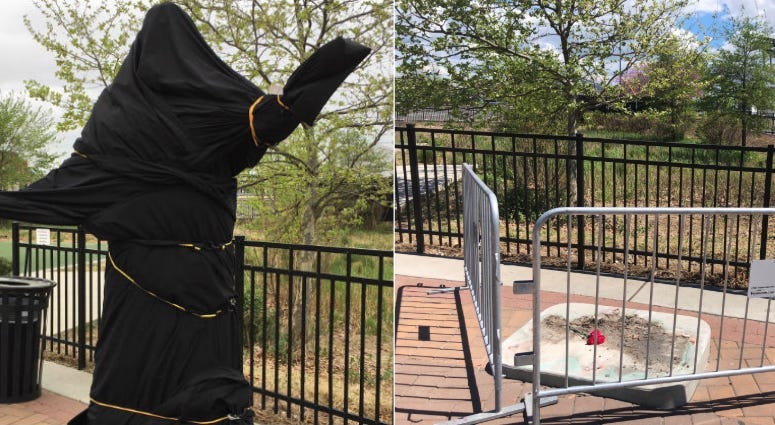 PHILADELPHIA (KYW Newsradio) — The Flyers' decision to drop Kate Smith over offensive lyrics from the 1930s is continuing to incite controversy.

Lou Scheinfeld, vice president of the Flyers in 1969, was the first to play Smith's version of "God Bless America" at a game. He didn't believe it at first when he read on Friday that the Flyers had dropped the song and covered her statue near the Wells Fargo Center.

The Kate Smith statue near the Wells Fargo Center is covered, amid reports the @NHLFlyers have cut ties with Smith over racist song lyrics. pic.twitter.com/I6eCsT5oRl

The Kate Smith statue has been removed from the Sports Complex. All that’s here now where the statue once stood are 3 flowers #KateSmith @KYWNewsradio pic.twitter.com/gwR3fIOzwp

The Flyers' move came hours after the New York Yankees decided to stop playing Smith because she had sung songs with racist lyrics.

"There couldn't have even been that much discussion in the front office," he assumed. "It was like, 'Oh my gosh, we've got to do this. The Yankees have done it and we don't want to upset our fans.' Well, it has backfired because it has really upset their fans."

Scheinfeld, who was close with the late Flyers chairman Ed Snider, said Snider would not have had a knee-jerk reaction.

Scheinfeld also noted that the image of a statue bound with black cloth before being removed wouldn't have happened.

"There's a concrete base with dirt on it. Ed Snider would never have allowed his Flyers, his organization, to be embarrassed like this."