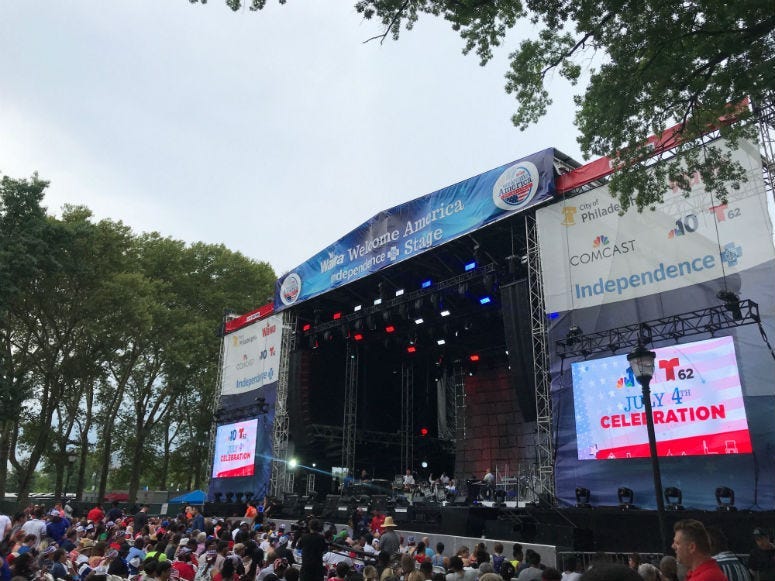 PHILADELPHIA (KYW Newsradio) — The sun and heat didn’t keep people from gathering along the Ben Franklin Parkway for the annual Fourth of July celebration.

Vendors lined the parkway with carnival games, food, gifts and drinks. But one of the more popular places was the cooling stations with fans whirling, spraying a mist of cool water in visitors' faces, like 7-year-old Isaiah.

"It feels great, it feels like water sprinkling out of a mouth," he said.

Robert and his family are here from Florida.

"We went to the zoo, and we also checked out the Franklin Institute, Independence Hall," Robert's son said.

They said the temperatures rival their home state.

"The humidity level is about the same. Of course someone yesterday reported to me it’s about 104, so this is a little bit better than back home," Robert said.

People soaked their shirts in pools of cool water, and even one person was wearing a Speedo.

Rain or shine, there’s only one place to be for Independence Day.

"Philly for the Fourth!" Robert said.

Many showed up for the performances Jennifer Hudson, Meghan Trainor and the Philly Pops in the evening.

Update: Mother Nature was good to us (no rain!) and Jennifer Hudson killed it!! #JulyFourth #WawaWelcomeAmerica @KYWNewsradio -------- pic.twitter.com/3wuQ7TxZc4