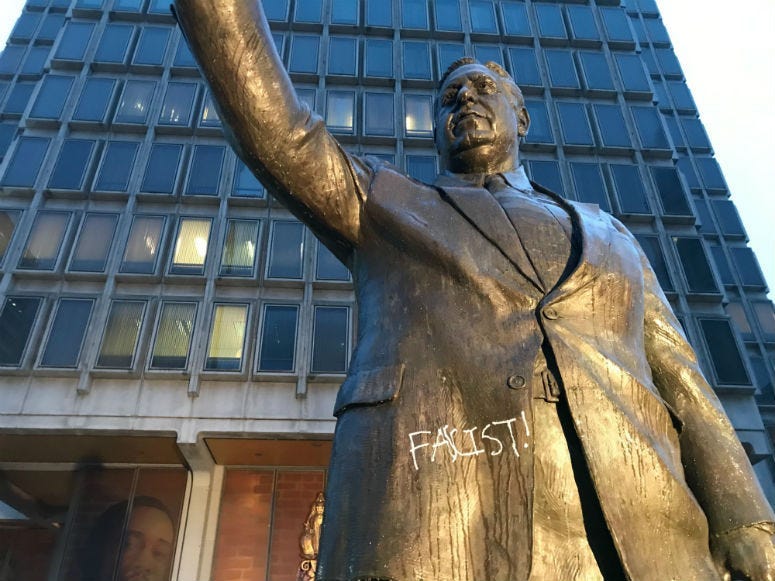 December 9, 2019 12/09/2019 2:46 pm
PHILADELPHIA (KYW Newsradio) — A vandal struck the Frank Rizzo statue in Center City once again, and police believe it happened at some point over the weekend.

"Facist!" is painted onto the statue in front of the Municipal Services Building. It’s written in white on the jacket below Rizzo’s right arm that’s out extended for a wave.

The former mayor and police commissioner's track record and the statue’s existence has sparked debate through the years.

Some, like Tanasha, say Rizzo’s track record with African Americans and his tactics shouldn’t be celebrated.

“Not good if it has something to do with racism and we’re supposed to unite as a people and come together," she said.

Others, like Jack, say however one feels, vandalism isn’t the right approach.

"I know a lot of people have issues with it but it’s not the way to go about it," he said.

While many say Rizzo shouldn’t be honored on this public space because of a history of mistreating African Americans and those in the LGBTQ community when he was the top cop, others argue he was just doing his job to fight crime and he actually promoted African Americans in the department.

In August two years ago, someone threw eggs at the statue that was followed by someone spray painting it. A couple months later, city officials said they listened to all sides and opinions and decided to move the statue the same time Thomas Paine Park would be renovated.

The move is slated for 2021, but no new location has been set.