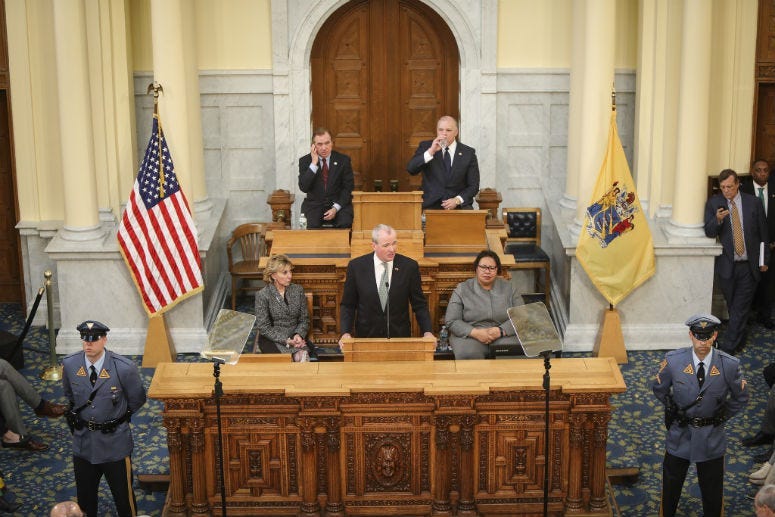 March 5, 2019 03/05/2019 11:46 pm
TRENTON, N.J. (KYW Newsradio) — Hundreds of millions of dollars more for New Jersey's public schools. A record contribution to state pensions. An expanded tax on high earners. That's what Gov. Phil Murphy is calling for as part of the $39 billion budget he unveiled in Trenton Tuesday.

But the work to convince skeptical lawmakers in his own party has only just begun.

"This is not a tax that will be paid by anyone in the middle class. Period. Full stop," said Murphy.

It's a pre-emptive strike from the governor against what Republicans will argue during the upcoming assembly elections. But it's also a message for Democrats like Speaker Craig Coughlin and Senate President Steve Sweeney - they sat behind Murphy and did not clap for his millionaires tax that would rope in more than just those making over $5 million as it does now.

"Our taxpayers overwhelmingly support this, across party lines and across the state. We should listen to them and do this together," Murphy said.

Murphy's budget finds more than $1 billion in savings, mostly from changes to state workers' health benefits. And he boasts of growing reserves.

"I ask you to find the last time we had consecutive years of billion-dollar-plus surpluses in the state of New Jersey," he added.

READ: Philly voters will likely face 4 ballot questions in May

"I know we're not across the finish line yet, but we are closer than ever before," Murphy said.

He calls for no fare increases on NJ Transit. Other sources of revenue include a new penalty on some businesses that don't provide health insurance to employees.

He also wants to raise to $50 what's currently a $2 gun purchase permit.

READ: New poll on Phil Murphy after a year as New Jersey governor

The deadline for a budget deal is June 30.