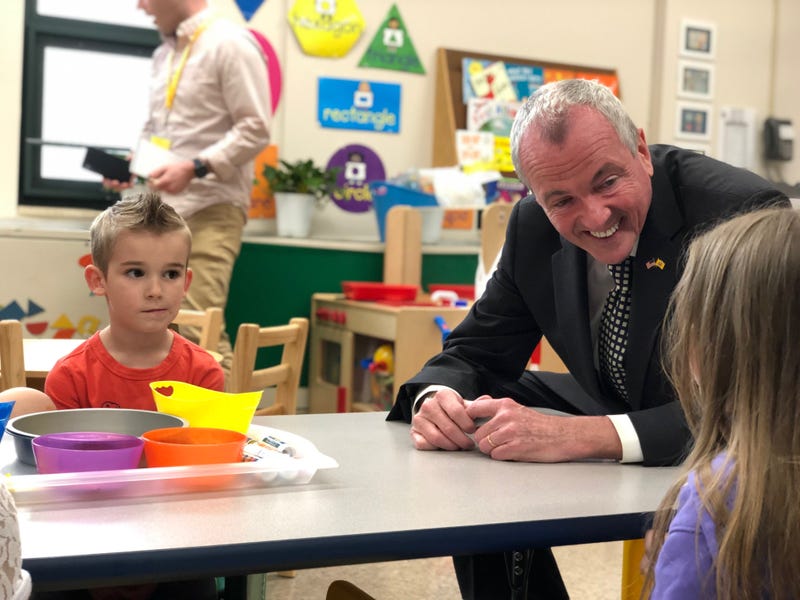 Perched on seats designed for apolitical 4 year olds, the grown Democratic men created bird feathers using construction paper and glue sticks, while receiving tips in creativity — and perhaps civility — from the kids at their tables.

"This is the best work we’ll do all week — right there," said Murphy. Arts and crafts aside, the pair visited Oakview Elementary School in Gloucester County to push for more money for pre-K programs.

"This is not just putting more money into the system when it comes to pre-K," Murphy explained. "This is allowing kids to access it who literally otherwise — if mom and dad couldn't afford it, they literally wouldn't have it."

"You guys (in the media) don’t focus on the things we actually do agree on," Sweeney added. "We do agree on a lot, and I think we’ve demonstrated that."

A practicing Catholic, Murphy "wrestled" with the decision to approve the bill.

"I became convinced over the past several months that it shouldn't be the law that decides this," he said. "It should be a personal choice."

They suggested they’re not priming for a playground fight over the millionaires tax and pensions and benefits reform ahead of the July 1 budget deadline.

Today, @NJSenatePres and I visited West Deptford – one of 64 school districts we invested in last year to help grow the promise of pre-K.Every dollar we invest in pre-K goes toward making NJ a more affordable place for middle-class families.https://t.co/bgoryOMcL3 pic.twitter.com/EXQqBfMTFN

Pre-K makes an undeniable impact on children’s lifelong academic success. I’m grateful @GovMurphy & @DrLRepollet share in my commitment to expanding access to Pre-K in @WDeptford and all of NJ. pic.twitter.com/TBJO1UeVYX

"It’s too early in the process, but do you agree — we’ve gotten off to a good start, generally?" asked Murphy.