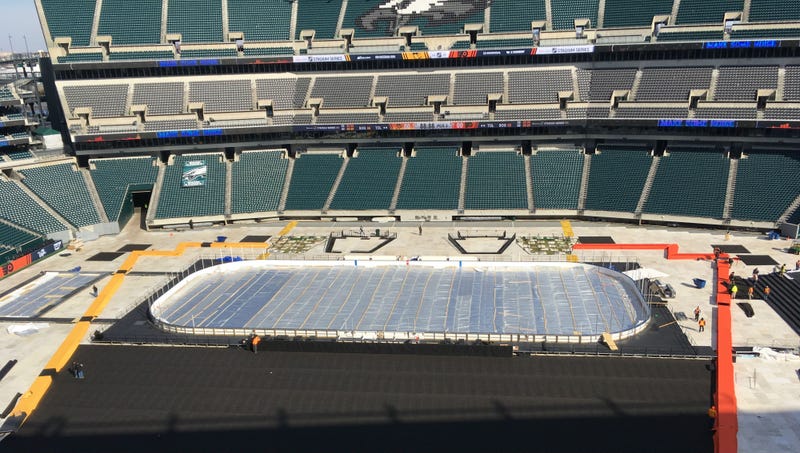 February 21, 2019 02/21/2019 9:00 am
PHILADELPHIA (KYW Newsradio) — The "Rocky" steps at the Art Museum aren't the only ones in Philadelphia. Crews are building a second set at the Linc for Saturday night's outdoor Flyers game.
Next to the ice rink now at Lincoln Financial Field is a miniature replica of one of Philadelphia's most recognizable spots, says Steve Mayer, the NHL's chief content officer for events and entertainment.

Crews at @LFFStadium were spreading ice melt in the stands, ahead of today's snow. It's rain, though, in the forecast for Saturday night's outdoor @NHLFlyers game. pic.twitter.com/GmB59CfDxB

"The stage behind us represents the 'Rocky' stairs at the Philadelphia Art Museum. We wanted to, wherever we go, kind of break out and bring to life wherever we happen to be. And in Philadelphia, that's one of the most iconic landmarks," Mayer said.

RELATED: On day 3 of preparations, crews put down foundation for Flyers outdoor game at the Linc

That stage is where Keith Urban and other performers will entertain the crowd of nearly 69,000. Mayer says the pregame ceremonies will include not only white-hot Flyers mascot Gritty, but also players, alumni and mascots representing all of Philadelphia's sports teams. He says an undisclosed "Philadelphia celebrity" will drop the puck.

Light rain is forecast for Saturday's 8:20 p.m. Flyers showdown against Pittsburgh, but Mayer says it doesn't look like anything that could  postpone the game.

"We have played in the rain before. We can't play in a torrential downpour. But right now if you look at the weather forecast — and it does change actually hour by hour — there's no call for severe or heavy rain. So we're really confident, based on what we're reading right now that the game will go as planned."

Mayer says, in the event the game is postponed until Sunday, it would likely start at 6 p.m., because there's an 8 p.m. Michael Buble concert across the street at the Wells Fargo Center.

A panoramic view of the rink at the Linc. #StadiumSeries pic.twitter.com/GFiePAucFk