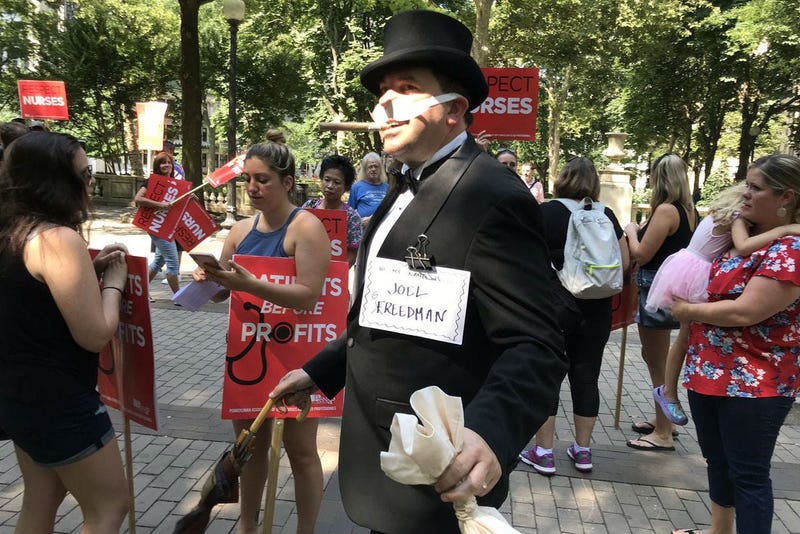 PHILADELPHIA (KYW Newsradio) — As Hahnemann employees and patients wait to find out what’s next in the effort to keep the hospital open, the nurse’s union led a march to the CEO's home near Rittenhouse Square.
One of the chants from the dozens who marched from the park to an address connected to the Hahnemann CEO was, "Joel Freedman, you can't hide. We can see your greedy side."

By all accounts, Freedman wasn't there, but someone dressed as the Monopoly Man, "Uncle Pennybags," with a Freedman name tag, marched with the Hahnemann employees.

Ashley Padula has been a nurse at the hospital for five years. She says the announcement that the place would close was a big blow and she may be changing her career path.

"Probably won't work in bedside nursing anymore," she said. "Probably do like homecare or something, and I know a lot of people are considering changes like that."

Nurse Jenna Mechalas is also concerned about her career, but she said she wanted to focus on those who rely on Hahnemann for their care.

"I'm scared, obviously, for my patients but also my co-workers. I've had co-workers work there for 40 plus years and I don't know how they're gonna adjust to a new environment," she said.

"We have patients who are plagued by chronic disease, opioid abuse and also mental illness. So, I don’t know how the city is going to absorb our patients."

The protesters gave credit to the state health department for stepping in to, at least buy time. And, whatever happens next, this worker named Selena says they have to stick together.