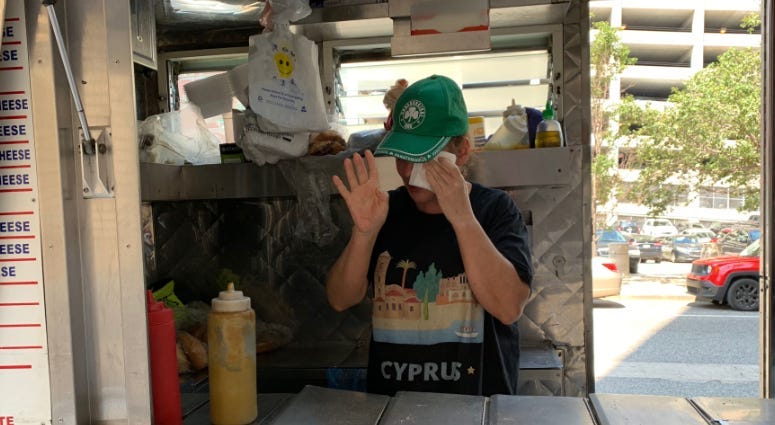 The long-time neighbors have served breakfast and lunch outside the hospital's 16th and Arch streets entrance for years, but now, they may need to relocate.

"Business is going to be very slow. Maybe we lose this spot because if it's slow, we have to move," said Walid Rachedi, who has a halal truck.

He estimates 80 percent of his business comes from Hahnemann. Moving to a new location brings its own set of problems, he said, from applying for a new spot through to city to acquiring that location through a lottery.

Thirty yards up the block, married duo Maria Santourtzoglou and Alex Bitlianou have no choice but to end their 13-year relationship with Hahnemann, selling breakfast to employees and students.

"It's very difficult and I didn't think it was gonna come to this," admitted Santourtzoglou. "I haven't thought of what I'm gonna do. I still have a daughter in college and my bills have to be paid. But I have to move on. I have to."

Santourtzoglou agreed with Rachedi that a massive amount of traffic comes from Hahnemann. No matter the food or appearance of the truck, she said it all comes down to location.

Thinking about other vendors like her who may have to give up their sidewalk spot, Santourtzoglou had to hold back tears.

"My heart goes out to these people because they're in the same boat that I am. But I think everything happens for a reason," she said.

"Hahnemann probably was our No. 1 client," said Westy's manager Sean Everitt, "all their employees. We're gonna take a serious hit."

But Everitt said the tavern's decades-long relationship with the hospital transcends dollars and cents.

"We've been here since 1945. It's a corner bar, but we just have all different ranges of clientele. So from Hahnemann alone, we had their janitor staff to security to their COOs (who) come here, doctors, nurses," he said. "Everyone just kinda kicks back and lets loose, relaxing before they go home."

Next month, hundreds of Hahnemann employees and students will gather at Westy's for one final farewell blowout.