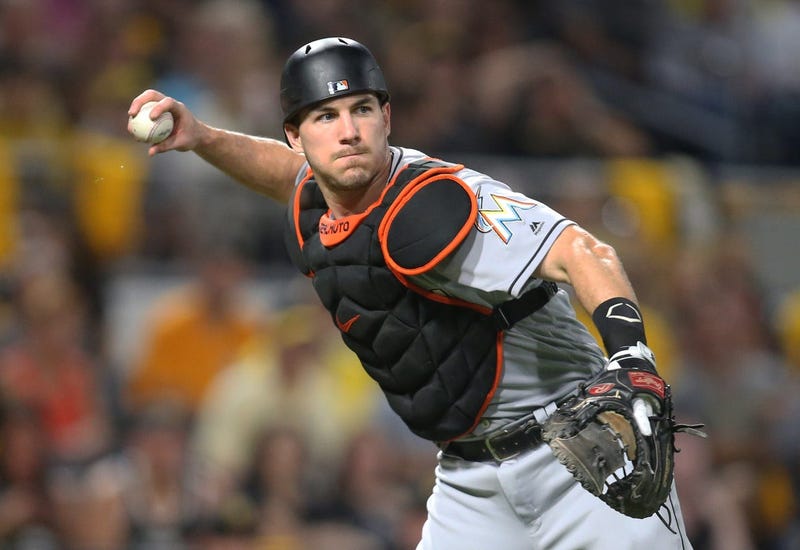 July 23, 2020 07/23/2020 3:09 pm
PHILADELPHIA (KYW Newsradio) — The baseball season might seem really short this year, but the subject of All-star catcher J.T. Realmuto's contract might drag on for some time if the Phillies don’t extend him for the long term.

Realmuto’s contract situation was back in the news Thursday after the Dodgers signed Mookie Betts to a very lucrative 12-year deal.

After the coronavirus pandemic forced a pause to the 2020 season for several months, hurting Major League Baseball's revenue, many observers wondered how the free agent market in the upcoming off-season would be affected.

Realmuto, considered one of the game’s best catchers — if not the best — can hit free agency for the first time in his career.

On July 9, Realmuto told the media his contract talks with the Phils, “haven’t really gone anywhere.” Maybe Betts’ experience is a sign that Realmuto can land a big deal in a year marred by the economic impact of a global pandemic.

Bryce Harper, who has publicly said he wants Realmuto in Philadelphia for a long time — like himself — said on Wednesday that Betts’ deal should help the catcher's ability to strike a lucrative deal with any team.

Hopefully with the Phillies, of course.

“I think the Mookie Betts deal just goes to show that teams can still afford players at this moment, in this trying time of COVID. ... And you know what — I just think he would help us as an organization.”

Harper hopes the 13-year, $330 million contract he landed prior to the 2019 season can help the Phils sign big names like Realumto.

“I think my contract is pretty suitable to bring guys in here. That’s why I lengthened it out for as long as I did and hopefully we can get that deal done to the best of our ability,” Harper said.

Phillies Manager Joe Girardi announced Wednesday that Zack Wheeler’s wife, Dominique, had a healthy baby boy earlier this week. That allows the Phils to slot Wheeler for the second game of the season, Saturday versus the Marlins. Vince Velasquez will pitch Sunday, and Jake Arrieta Monday.

“I think when we came here approximately three weeks ago, none of us were sure if we were going to be able to get to this day, and I think the fact that we have is a credit to everyone in Major League Baseball .... So, now that we’re at this point, let’s not mess it up,” Girardi said.

The last rotation spot was still unknown as of Wednesday night. Zach Eflin is a little behind after dealing with some back spasms during summer camp. Eflin is pitching a simulated game on Thursday.

For the opening week at Citizens Bank Park, health care workers from Nemours Children’s Health System and Jefferson Health will be featured on cutouts in the seats.

The cutouts are 18"x36". They’re called "Phillies Game Faces." The medical workers are wearing either their hospital attire or Phillies gear.

Soon every fan will be able to buy a similar cutout of themselves — $25 for season ticket holders, $40 for the general public. Net proceeds will go to Phillies Charities.

The Phillies say they will share more details about this in the future.

#Phillies will be honoring healthcare heroes with these Phillies Game Faces, in the spotlight for the opening week at CBP.Soon, season ticket holders can buy a game face for $25 and general public $40. Proceeds benefit Phillies Charities. Details to come.--: Phillies pic.twitter.com/18DZvzu1L4

“We are proud to honor the countless health care heroes who have shown extraordinary care and commitment to our community during this pandemic,” Phillies Executive Vice President Dave Buck said in a statement. “As our broadcast cameras capture the ‘crowd’ on Nemours Opening Day, we want our doctors, nurses and healthcare workers to know that we are so grateful for their sacrifice and courage.”​