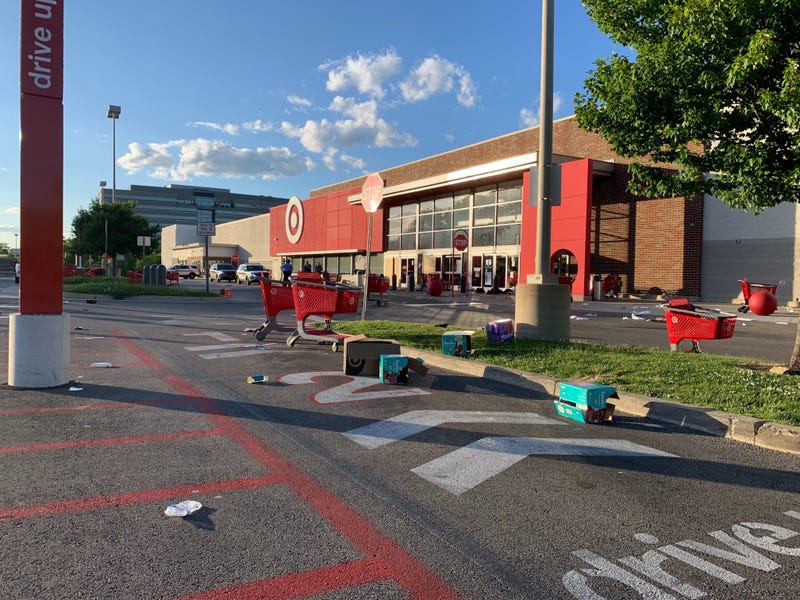 Philadelphia Shuts Down Center City as Looting Continues in Aftermath of Saturday Riots
KING OF PRUSSIA, Pa. (KYW Newsradio) — There was a heavy police presence around malls in Montgomery County on Sunday. One day after 12 people were arrested for smashing windows at and around the King of Prussia Mall, Upper Merion police blocked off roads with the township under a curfew that started at 8 p.m.

There was a similar scene around Willow Grove Park Mall. While there are reports of minor damage, it seems to have worked to prevent any larger acts of destruction.

The Target on City Avenue was looted around 6:30 p.m. Not long after the parking lot was a surreal scene, with random items scattered about, including boxes of diapers, shampoo and a smashed TV.

But not long after, in King of Prussia, a large group of protesters, who had lined the busy intersection of Henderson Road and Dekalb Pike for hours, moved into the intersection and took a knee in the middle of the street for just shy of nine minutes — the time Minneapolis police officer Derek Chauvin’s knee was on George Floyd’s throat.

“People are gonna do what they’re gonna do, there’s nothing you can really do, has nothing to do with us. I honestly just want everybody to keep everything peaceful and try to come together as one. Treat everybody as you want to be treated.”

Others at the protest say, while they’re protesting peacefully, they do understand why people are acting out, adding deaths like Floyd’s have happened for years and nothing’s changed.

"We're out here changing a life right now for those 10 minutes, for y'all to look at injustice. Look what injustice put together. Look what this country — doing this for years after years. We’re tired of it. All of us. That's not just a race. That's a tired community, country, of people. We're tired. We have to do something."

Holmes says her action is non-violent protest, but "unfortunately we also need the violence, because at this point they're not listening either way we put it."