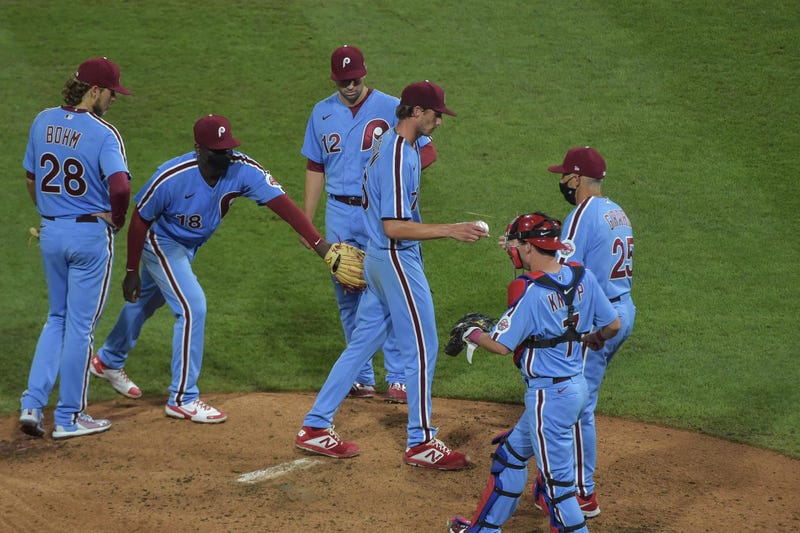 August 14, 2020 08/14/2020 4:47 pm
PHILADELPHIA (KYW Newsrdaio) — The Phillies just got swept by a team that lost 108 games last season. It got so bad Thursday night that utility infielder Neil Walker ended up pitching in the ninth inning.

"I've been in baseball long enough to know that it happens sometimes. You never feel really good about when you have to do that. It's frustrating, but — for me — I just didn't want to use (Tommy) Hunter or (Héctor) Neris in (an) 11-4 game," Manager Joe Girardi said.

Girardi's last-place Phils are losers of five out of six.

One of the issues that keep haunting the Phils is the bullpen.

Jake Arrieta allowed four runs in the fifth — making way for the struggling bullpen, which now has an ERA over 10.

"If we don't start to play better, we're gonna be in a tough spot. We already have to catch up quite a bit," Arrieta said.

The Phils are 5-9, which is good for last place in the NL East.

"It's concerning. Nobody wants to start off 5-9 whether you're (in) a 162-game season or not, but with this shortened season, it's obviously a little bit — we have to get it going quicker than we normally have to," Realmuto said.

Realmuto and Bryce Harper, who accounted for all four of the Phillies' runs Thursday, have been two of the few producing in the lineup recently.

"I think it's just such a short sample size. It's hard to get too frustrated right now," Realmuto said. "If Harp and I go on a slump the next week or two, we fully expect somebody in the lineup is gonna pick us up. That's just kinda how baseball works. Very rarely you get the whole team syncing together, or you'd be scoring 15 runs a game."

This week wasn't a step in the right direction.

"It's not good when you hear the cardboard cutouts booing," Phillies radio broadcaster Larry Andersen said after the final out on Thursday. "The Phils — they just got it handed to them for three games by Baltimore."

And it won't get easier.