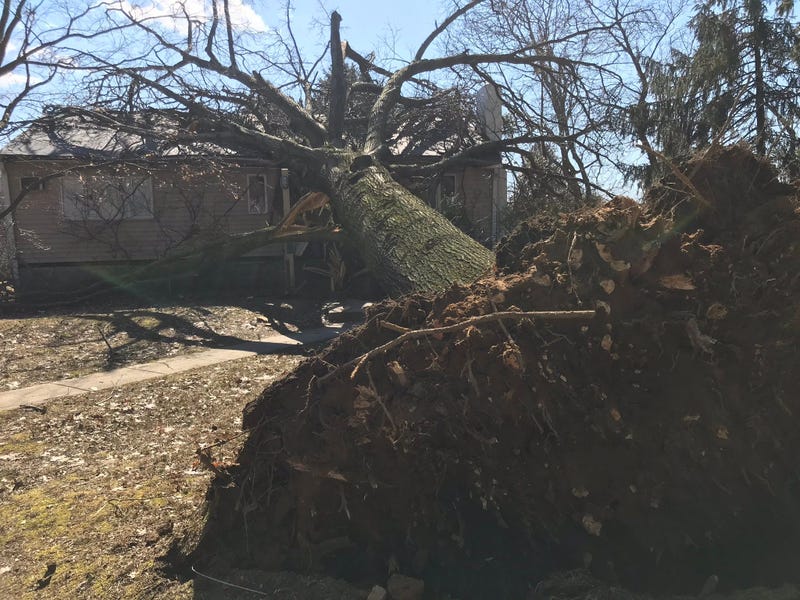 Thousands of homes and businesses are are without power in #Delco. That includes this Wawa on Providence Rd in Upper Providence. pic.twitter.com/zxS7ESBPDv

Bucks County has been hit the hardest, with more than 17,000 in the dark.

PSE&G has more than 300 customers still without electricity in parts of South Jersey, and Atlantic City Electric has about 600 without power.

Yikes. This is on Kirk Lane near Roberts Road in Upper Providence. @KYWNewsradio pic.twitter.com/GL94YHWlPV

A family in Media, Delaware County, had a close call when the high winds uprooted a tree that slammed into their house around 2:30 a.m.

"We heard the wind, and then all of a sudden we heard a couple of branches hit the back of house, and then just this horrific boom,” said Steve Olkowski, who lives in the house on the 900 block of North Orange Street with his wife.

Olkowski has some pine trees behind his house, and when branches fall off, he says he usually hears a snapping sound first.

A better look at the damage to this house on North Orange Street in Media. Because of the wind, a tree came crashing down from behind. The people, and the dogs, who live here weren’t hurt and they managed to get out safely. @KYWNewsradio pic.twitter.com/cxEFZBtHLx

"The tree looks actually looks like it just split the middle of the house," he said. "The tree was coming from my closet, about three feet off the floor of the bedroom. So, it’s sitting in there, we were able to crawl underneath the tree, get down the stairs and get the dogs out.”

Olkowski said they were able to get out safely. Police officers and firefighters rushed over to help.

“Yeah, we’re lucky,” Olkowski said. “Everything can be replaced. I count myself very lucky.”