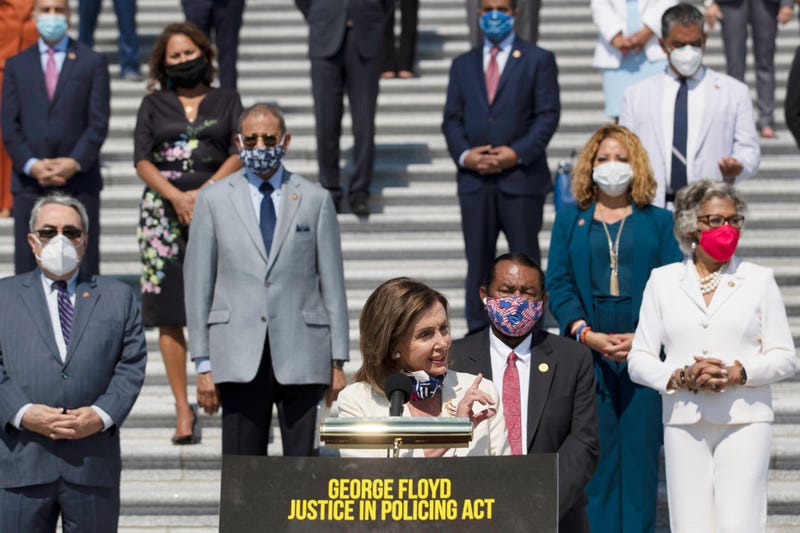 June 26, 2020 06/26/2020 1:26 pm
PHILADELPHIA (KYW Newsradio) — The U.S. House passed the George Floyd Justice in Policing Act on Thursday night with a vote mostly along party lines. Only a few Republicans supported the bill, and one was a Bucks County congressman.

Two bills on police reform are being considered in Congress, one in the Senate drawn up by Republicans, and the other in the House, by Democrats.

Bucks County Republican Brian Fitzpatrick, a former FBI agent, says the contract between police and the public needs to be repaired. He sees this as a launching point for meaningful reform and thinks a final version will include elements from both bills.

He said he believes any bill that passes should include protections for civil rights as well as protection for police both physically and from frivolous lawsuits.

"It's about ending racial profiling, transforming the culture of policing. It's not us versus them. It's we, together."

He went on to say the Senate bill is an insult because it doesn't provide concrete reform. He says it only offers suggestions.

Philadelphia-area Congress members Dwight Evans, Mary Gay Scanlon and Madeleine Dean say the passage of the act in the House is the beginning of "getting policing right.”

Scanlon said making choke holds illegal, ending qualified immunity for police and other measures are a long time in coming.

“A month to the day after George Floyd was murdered, we were able to bring to the floor and pass a bill to address some of the systemic issues that have made being a Black American a deadly condition,” she said.

Evans believes Republicans who are reluctant to address police violence against Black Americans will have a change of heart when they hear from their constituents.

"This should not be something we bounce back and forth like ping pong, because people's lives are in jeopardy, every single day.” Evans said.

He believes the Senate will come to its senses and will pass the measure, or he said, members will hear about it at the ballot box.

House Speaker Nancy Pelosi gathered with members of the Congressional Black Caucus on the Capitol steps, challenging opponents not to allow the deaths to have been in vain or the outpouring of public support  for changes to go unmatched. But the collapse of a Senate Republican bill leaves final legislation in doubt.

"Exactly one month ago, George Floyd spoke his final words — 'I can't breathe' — and changed the course of history," Pelosi said.

She said the Senate faces a choice "to honor George Floyd's life or to do nothing."

The George Floyd Justice in Policing Act is perhaps the most ambitious set of proposed changes to police procedures and accountability in decades. Backed by the nation's leading civil rights groups, it aims to match the moment of demonstrations that filled streets across the nation. It has almost zero chance of becoming law.

On the eve of the Thursday vote, President Donald Trump's administration said he would veto the bill. And Senate Majority Leader Mitch McConnell has also said it would not pass the Republican-held chamber.

After the GOP policing bill stalled this week, blocked by Democrats, Trump shrugged.

"If nothing happens with it, it's one of those things," Trump said. "We have different philosophies."

Congress is now at a familiar impasse despite protests outside their door and polling  that shows Americans overwhelmingly want changes after the deaths of Floyd, Breonna Taylor  and others in interactions with law enforcement. The two parties are instead appealing to voters ahead of the fall election, which will determine control of the House, Senate and White House.

It has been a month since Floyd's May 25 death sparked a global reckoning over police tactics and racial injustice. Since then, funeral services were held for Rayshard Brooks, a Black man shot and killed by police in Atlanta. Thursday is also what would have been the 18th birthday of Tamir Rice, a Black boy killed in Ohio in 2014.

Lawmakers who have been working from home during the COVID-19 crisis were summoned to the Capitol for an emotional, hours-long debate. Dozens voted by proxy under new pandemic rules.

KYW Newsradio's Kim Glovas, as well as The Associated Press, contributed to this report.