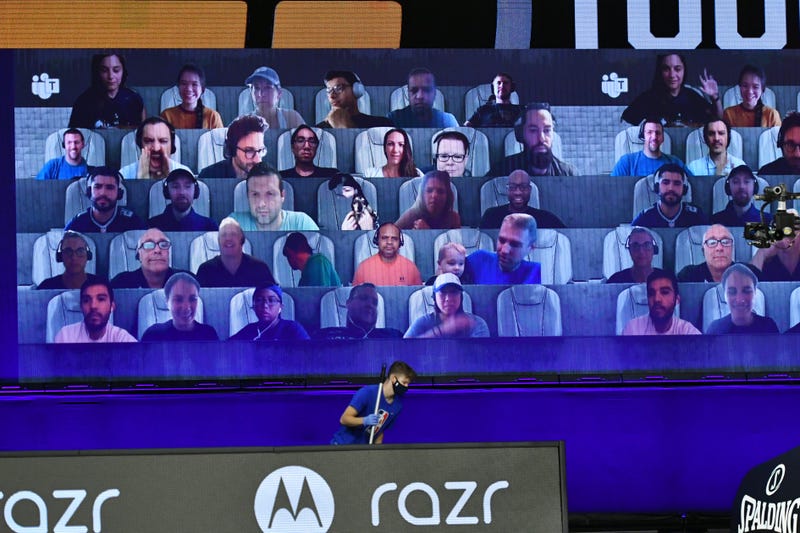 August 5, 2020 08/05/2020 5:46 pm
PHILADELPHIA (KYW Newsradio) — The Sixers went 29-2 at the Wells Fargo Center this season, and they definitely didn’t do it all by themselves. It helped to have the loyal and dedicated fan base that packed that place every game.

Obviously, a little bit of that home-court advantage was lost when the season restarted at the ESPN Wide World of Sports Complex at Disney World, where they play without spectators physically in one of the three venues.

But — as you’ve probably already noticed watching the games — the NBA and its teams, like the Sixers, collaborated to involve fans virtually and make it seem like they’re actually there.

If you look closely, you can see live camera feeds of hundreds of fans on huge LED screens behind the baskets and benches. The fans are in front of two-dimensional seats.

So, how in the world do the Sixers get their fans on those screens?

“You actually have a specific link and a program you have to log into,” Sixers Chief Marketing Officer Katie O’Reilly explained. “You have to be there 30 minutes early, have your whole setup. So there’s a program — you’re basically sitting in front of your computer screen watching, and you have to have your camera on so that your face can appear.”

Then, through a system powered by Microsoft, you’re kind of in Orlando watching the game.

And, it doesn’t cost a thing for Sixers fans. Season ticket holders, marketing and community partners, employees, employees’ families, and players’ friends and family members are able to sign up to be a virtual fan.

Most of the sections at Sixers “home” games, such as Monday night against the Spurs, will go to their fans. “Away” teams get a small portion of the two-dimensional seats.

Eventually, O’Reilly said they’ll launch a virtual fan sweepstakes that will give the general public a chance to participate in this neat experience.

“We’re all looking for ways to continue to keep our fans engaged,” she said. “So much of what we’re doing, of course, is for the fans, but it’s really trying to create that home environment.”

The Sixers are also continuing their ceremonial pregame bell ringing at their “home” restart games at Disney, as well as other traditions, such as Ron Brooks singing the national anthem and other in-game sounds.

So often when it comes to sports, fans will say they were lucky enough to be there. Sometimes, they’ll have tickets, programs, or some sort of 21st-century memento to help them remember the game or show that they attended.

Now, if you’re lucky enough to “be there” virtually, you use your cellphone to take a photo of yourself when you pop up on TV.