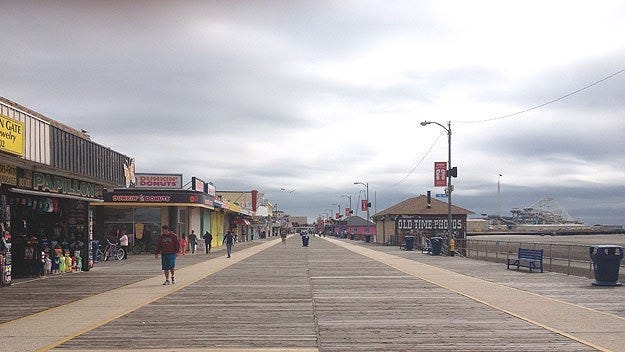 September 21, 2019 09/21/2019 8:00 am
WILDWOOD, N.J. (KYW Newsradio) — Earlier this month, there were concerns in Wildwood over the condition of the boardwalk, and Gov. Phil Murphy blocked a plan to provide $60 million in state funding to make repairs. Now, there are plans in the state legislature to get around the governor’s move.

Look at the boardwalk from above, and you don’t see a problem. Go underneath, and it’s another story.

State Senate President Steve Sweeney did during a tour earlier this week.

“The mayor touched a piece of it and a quarter of a section of the beam fell down,” Sweeney told KYW Newsradio.

Given its age (over a hundred) and its role in the tourist trade, Sweeney says Wildwood shouldn’t have to pay the freight to fix the boardwalk.

But a plan being floated by the local legislative delegation would provide $40 million over 10 years, rather than the $60 million over 15 years that the governor vetoed. And the money would come from the state’s Transportation Trust Fund.

The plan was unveiled while the governor was out of the country on a week long trade mission to India.

Murphy and Sweeney have been at odds on a number of issues recently, with Murphy putting $235 million in projects on hold, the majority of them in South Jersey, back in July.

Sweeney has suggested the moves are political payback for his work in opposition to an extension of the state’s millionaires tax. Murphy has said those moneys would be released if the revenues are there, insisting with that broader tax, they would be.