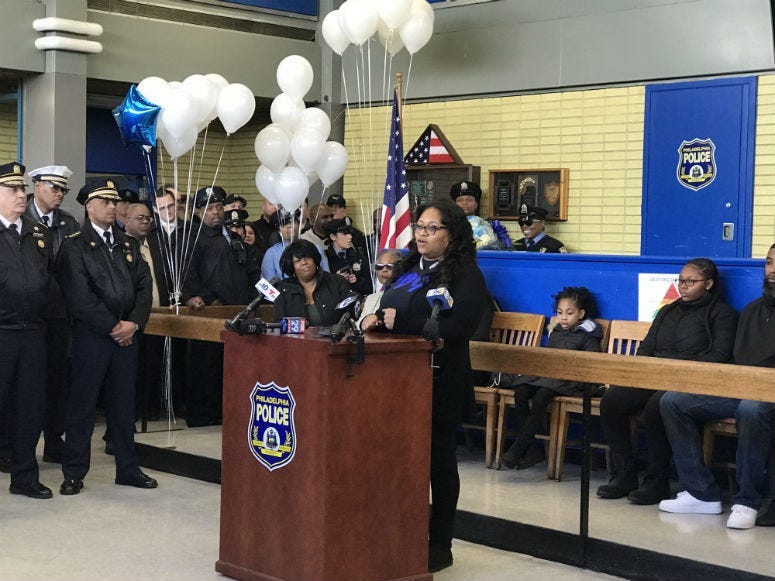 March 5, 2019 03/05/2019 11:08 pm
PHILADELPHIA (KYW Newsradio) — A memorial vigil was held for a Philadelphia police sergeant who was shot and killed inside a North Philadelphia business by two armed men four years ago.

Inside the 22nd District police station where Sgt. Robert Wilson III once worked, hundreds gathered to honor the man who sacrificed his life to protect innocent civilians.

Colleagues and family members spoke, including Sgt. Wilson's sister, Shaki'ra Wilson-Burroughs. She was wearing a shirt with her brother's badge number, 9990.

"I miss him every day. Four years is the longest I haven't spoken to him. It's hard," she said.

Outside 22nd District, balloons were released in Sgt. Wilson's honor.

His two sons were not at the ceremony.

On March 5, 2015, then 30-year-old Wilson was inside the Gamestop store at 21st Street and Lehigh Avenue to buy a birthday present for one of his sons when two armed men attempted to rob the place. Gunfire was exchanged, Sgt. Wilson was shot multiple times and was killed.

He is credited with shielding customers inside.

The two suspects were arrested and a plea deal was ultimately struck. The death penalty was taken off the table.

A memorial vigil to honor slain @PhillyPolice Sgt. Robert Wilson III was held today, the very day he was killed inside a North Philadelphia video game store in 2015. @KYWNewsradio watch the story at 5:30 on #CBS3 @CBSPhilly pic.twitter.com/hV29tyMZ6n

Police Commissioner Richard Ross says there will always be an outpouring of support to Sgt. Wilson's family.

"Its so important for us to be here irregardless of the passage of time. Over the years, we have to be here to show them that we care and that we will always be here to wrap our arms, both literally and figuratively, because we are one big family. And when I say that, I don't only mean people who wear this uniform. I talking about this community," Ross said.

Sgt. Wilson's plaque joins two others at the district, serving as a reminder of the dedication and service of the men and women in blue.