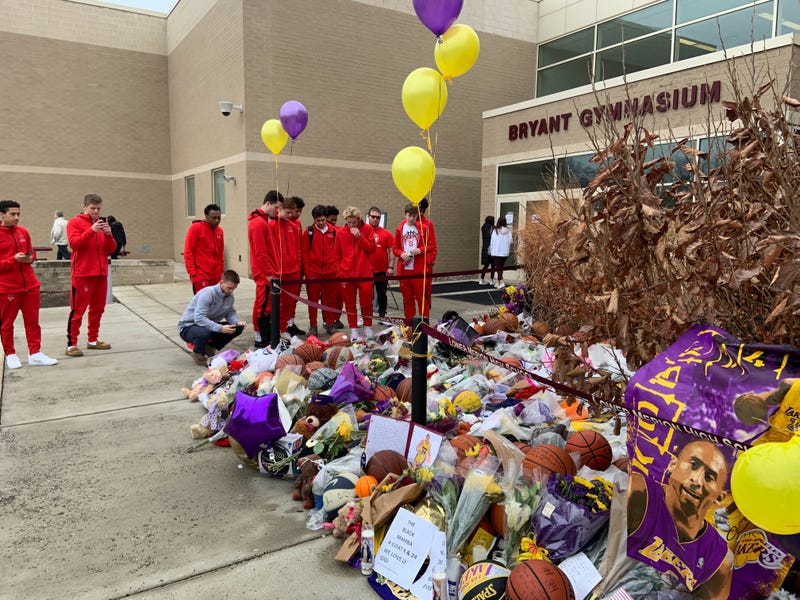 More than 1,500 people packed the Bryant Gymnasium at Lower Merion High School to pay tribute to the NBA star, his daughter and seven other who died in a helicopter crash last weekend.

Leaders played a video to honor him and unveiled his no. 33 jersey. The jersey was placed inside of a frame and hung on display inside the gym.

Coaches, team alumni and relatives of Kobe walk over for the unveiling of #33 LMHS jersey on wall of the Bryant Gym. #RIPKobeByrant pic.twitter.com/lZQJB3PpkG

Mike Bing, a senior at Lower Merion, said though the occasion was sad, it created unity.

"I think that it brings everyone together because we all come together to mourn this terrible tragedy," Bing said.

Mike Egan was a coach for the basketball team when Bryant was a junior and senior at the high school.

"He is one of our guys and we'll always remember him really as that 17-year-old kid who was out trying to win basketball games every night," Egan said.

Gabriele Imbiscuo, an LMHS alum from Wynwood, said he played on the same courts that Bryant used to practice at in his younger days.

"Kobe Bryant, he lived on Remington Road and he use to play on the courts there. I could see his courts right from my bedroom window," he said.

Many of Bryant's former high school teamtes were also in attendance.

The makeshift memorial outside of the gym continues to grow with flowers, balloons, and basketballs.

Memorial outside Bryant Gym continues to grow here at Lower Merion High. A tribute to the NBA superstar #KobeBryant will take place inside gym in between varsity girls and boys basketball games at 1PM ⁦@KYWNewsradio⁩ pic.twitter.com/Cv7QaZijP2

Lower Merion Officials decided to open the school online store to the public, due to an influx of community requests for LMHS basketball merchandise.

The public can purchase items at a cost until Feb. 15.