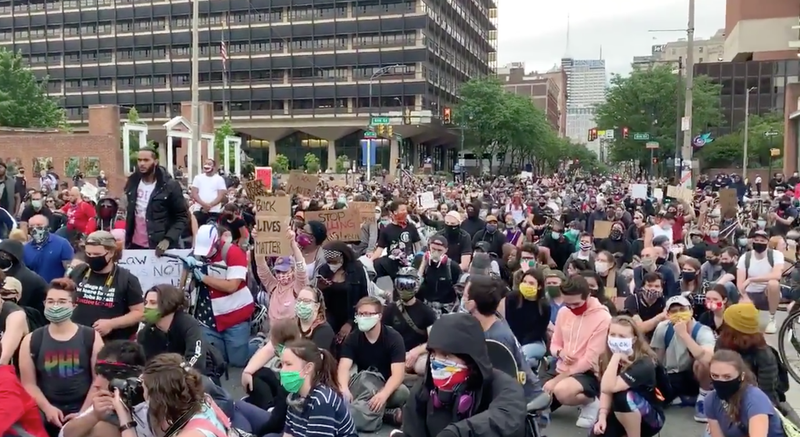 PHILADELPHIA (KYW Newsradio) — Protesters once again took over the streets of Philadelphia Tuesday, though this one did not result in clashes with police.

The afternoon-turned-evening protests remained peaceful for a fourth day of demonstrations in response to the death of Minneapolis black man George Floyd.

Protesters marched from the Philadelphia Museum of Art to City Hall and convened at Rittenhouse Square, where hundreds took a knee for Floyd.

Protestors taking over Spring Garden Street. There are hundreds of them @KYWNewsradio pic.twitter.com/46qBznMC7s

Protestors take a knee together at Rittenhouse Square after marching all throughout the city and that was it, no incidents to report @KYWNewsradio pic.twitter.com/wMW6aU72it

It appeared police were more prepared for this protest, as officers were placed on just about every corner of the route. There were no reported incidents or clashes with police within this group.

The demonstration was a first for Natalie, who was pleased with how it all went down.

“I’m black in America. I believe the system needs to be changed,” she said. “I’m just tired. I’m just tired of all this stuff. I want something different.”

She said Tuesday’s march was peaceful.

“No one got hurt, no tear gas, no nothing. It was a very peaceful protest, as it should be.”

Laura Beery, on the other hand, has been a part of almost every demonstration since Saturday.

“I wonder what makes more of a point,” she asked, “what’s going to make people riled up and make change.”

Temple University student Laura has marched for about 30 hours since Saturday.

“I am here in solidarity with my black friends, just to stand up for justice and against injustice,” she said.

The crowd dissipated then rejoined at Independence Mall, where they again took a knee for Floyd. The young group continued to move all around the city, from Market Street back to Rittenhouse, then over the Walnut Street Bridge into University City.

Peaceful protesters arrive on Independence Mall and stop to take a knee as far back as I can see. @KYWNewsradio #GeorgeFloyd #Philly pic.twitter.com/VO50UlSLIA

Protesters returned to City Hall and were there past the 8:30 p.m. curfew.

Just a day prior, protesters flooded the Vine Street Expressway, and police said they had to issue tear gas to disperse the unruly crowd. Overnight, at least three people died in connection to the civil unrest.

There were reports of people using explosives to break into ATMs again late Tuesday night in Brewerytown. At least three ATMs have been hit in the area.

In North Philadelphia, a man was killed Tuesday morning when he tried to blow up an ATM.

No tolerance for violence

During a city briefing Tuesday, Mayor Jim Kenney said the city will not tolerate acts of violence or vandalism amid the citywide protests.

“While I can’t possibly ever truly comprehend the pain of our black residents are feeling, I want to let you know we see you and we hear you. What isn’t acceptable is some of the acts we’ve seen transpire yesterday.”

Kenney was referring to a group of people in Fishtown Monday night who came out with baseball bats. They stood in front of the 26th Police District and said they wanted to protect their Fishtown neighborhood.

In Fishtown, on one side of Girard are this group who say they are on the side of police and want to protect the neighborhood. They have bats and other objects in their hands. #BlackLivesMatter protestors are across the street. Everyone here breaking curfew @KYWNewsradio pic.twitter.com/0TWSrwLgrq

Protesters stood on the other side of the street, with police in the middle.

At least one physical assault was reported.

He called their actions “antagonistic” and they “made a bad situation worse.”

“We understand a community’s desire to protect their neighborhood, and if they want to do that in peace, we would allow it — regardless of the neighborhood. But armed vigilantism will not be tolerated moving forward,” he said.

Police were able to disperse the Fishtown group, but Kenney was disappointed with how long it took. He was also “disturbed” that some officers on the scene high-fived those armed residents and took photos with some.

Kenney also had a message to young people looting and destroying businesses.

“A pair of sneakers or a video game are simply not worth your future,” Kenney said.

Police Commissioner Danielle Outlaw reiterated that the mayhem is unrelated to any noble cause.

Although the police department will support peaceful demonstrations, “we cannot tolerate acts of violence and other criminal activity.”

To date, Outlaw said 692 arrests have been made, and at least 25 officers have been injured. She expects numbers to continue to grow.

Another citywide curfew goes into effect Tuesday at 8:30 p.m., as the polls close at 8 p.m.