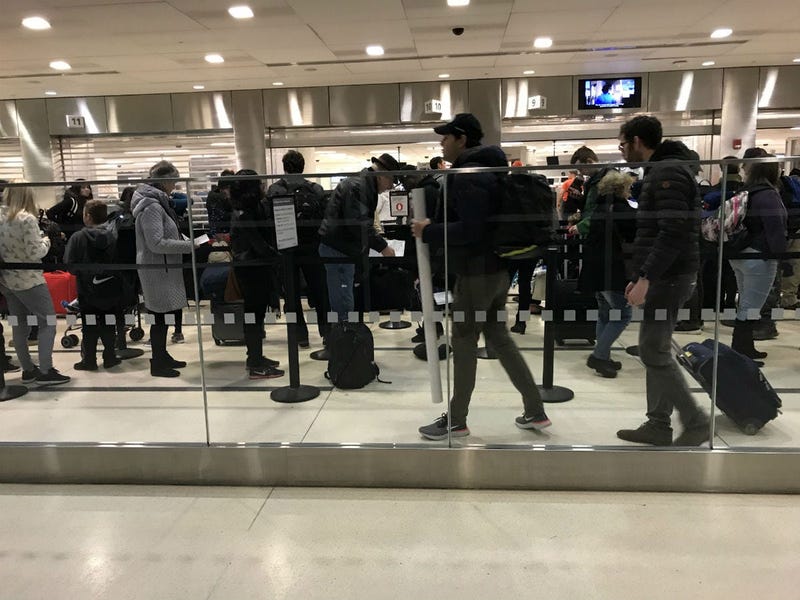 January 17, 2019 01/17/2019 12:55 pm
PHILADELPHIA (KYW Newsradio) — President Donald Trump signed a bill that would guarantee backpay for federal employees when the government reopens. But in the meantime, many of the workers are still on the clock and feeling the squeeze.

At Philadelphia International Airport, hundreds of TSA officers are working and waiting.

"I just feel like it’s gonna last forever here. There doesn't seem to be any end in sight," said Joe Shuker, local president of the union that represents TSA officers in Philadelphia.

Joe Shuker, the local TSA Union President in Philadelphia, says many of the officers have been going to work because they live relatively close to the airport. But, how long can that last if more paychecks are missed and bills pile up? @KYWNewsradio pic.twitter.com/GkYWaK31Zk

Shuker says those who are being squeezed the most are the newer TSA officers who are low on the payscale and less likely to be married and have a spouse’s income to help soften the blow; and families that have both spouses working for the TSA.

"Some officers have some help from their families, but a lot don’t," Shuker said. "Some car payments have been deferred, I’ve heard, where people give them 15 days or tack it on at the end. There are people with landlords who aren’t a big company like a mortgage company, and the guy’s counting on your rent check to pay his bills."

Gary Renfrow, the TSA’s federal security director for Philadelphia International Airport, says this shutdown has put his team in "uncharted territory," but the officers are staying true to the oath they take when they get the job.

"And they say they’ll well and faithfully serve in the position that they’re in, and these folks are doing that. While we have some folks that call out because they can’t be here, most are getting to work,” Renfrow said.

Gary Renfrow, TSA's Federal Security Director at @PHLAirport, gives a lot of credit to the TSA officers who are coming in even though they’re not getting paid. @KYWNewsradio pic.twitter.com/dZc1h0b1RF

There have been relatively few callouts in Philadelphia because of where the officers live, Shuker explained.

"Other places like Houston, (TSA officers) have long commutes — 45 minutes to an hour," he said. "We have people who live far away, but I would say the majority of our officers are pretty close."

But as the shutdown drags on, potentially more paychecks are missed, Shuker says that all could change, and more TSA officers could decide to stay home, "instead of putting gas in the car to come to a job where they’re not getting paid."

RELATED: Shutdown may upend State of the Union speech

The shutdown has led to many generous gestures. Some of the restaurants in the airport have been providing the occassional free meal, and an airline is covering lunch Thursday. The union received donations from Catholic Social Services and Philabundance and has been distributing the food to the agents, along with gift cards for gas or groceries.

But Shuker says all of that can only help for so long.

"We’re hanging on, but by a thread right now," he said.