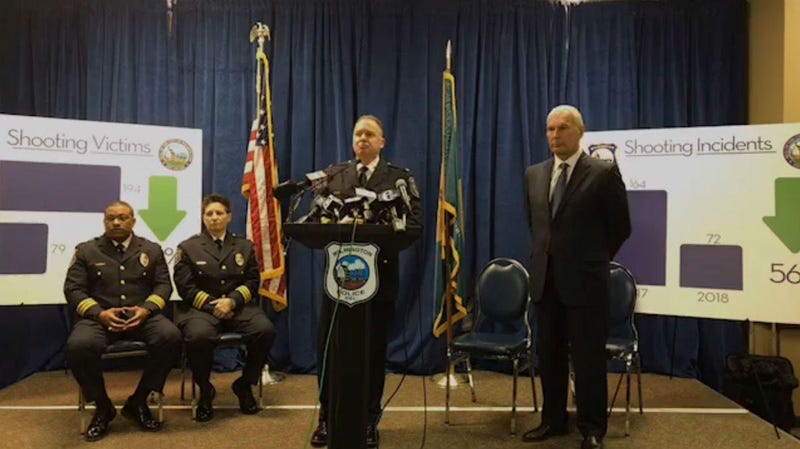 PHILADELPHIA (KYW Newsradio) — There are now more questions than answers following the high-speed, two-state pursuit Wednesday that resulted in crashed police vehicles on I-95 and the suspect's vehicle slamming into a SEPTA bus in South Philadelphia. Witnesses are providing key information on the last leg of the chase.

Wilmington Police Chief Robert Tracy says two people were practically jumping out of the Acura that hit the bus, before impact. And, he says, witnesses saw one of them with a gun in his waistband.

"We know two people bailed from that vehicle," Tracy said. "We had witnesses saying that he was jumping out of the vehicle as it was hitting the bus. This is a desparate individual. We don't know whether it was him or someone else just as dangerous that had a firearm, that could be in that neighborhood right now."

Philadelphia Police have been able to identify one person involved in the incident: 20-year old Dejuan Robinson, who remains on the loose, and was wanted for questioning in connection with two murders. Police had a warrant out for him on a firearms violation.

Authorities say he slipped away from Wilmington cops Wednesday morning and was last seen running from the intersection of Broad Street and Oregon Avenue.

Robinson was not apprehended, but they believe it was him, along with another man. Tracy also said two more passengers were left behind in the vehicle, but no one was rounded up.

Robinson is considered armed and dangerous.

As @PhillyPolice hunt Delaware murder suspect Dejuan Robinson, South Philly High and 3 elementary schools are locked down. He bailed at Broad & Oregon, after slamming into a Septa bus pic.twitter.com/gPQGcebmAr

The driver of another car involved in the crash was checked out at an area hospital and is expected to be fine.

RELATED: Person of interest in Wilmington homicides at large in South Philly after police pursuit

Wilmington police said officers were attempting to stop Robinson around 11 a.m. Wednesday. Robinson led the officers on a pursuit, and he caused an accident on I-95 with two Wilmington cops and a Pennsylvania state troooper near Philadelphia International Airport. The officers' injuries are not life threatening.

Reporters questioned Tracy about whether proper protocol was followed, because Wilmington police went over state lines in pursuit.

"In your hot pursuit, you can continue across state lines, on felonies," Tracy said.

Tracy said it depends on the level of felony, and whether it was justified.

"Could it be a training issue, or discipline. I'm waiting to see all of those things come into place. I don't want to make a comment, because of the rights of the officers, right now at this point," he said.

"I'll take a look at the actions of the officers and the totality of what happened," Tracy said. "When you do get into pursuits, this is something that we keep in mind, that this is the type of thing could happen. Thank God nobody is more seriously hurt than what happened."

Police say Robinson has some parole violations and they want to talk to him about two homicides.

New pic of Dejuan Robinson. He is a person of interest for multiple homicides & probation violations in the state of DE, aluding police causing injuries & Firearms violations in PA. 5'6" 160lbs. Last seen South Phila. in the area of Broad and Oregon, and is armed & dangerous pic.twitter.com/N2KJupAqLW

Philadelphia Police Commissioner Richard Ross says they're working with the Wilmington Police Department as they try to learn more about Robinson and what happened on Wednesday.

"We will be talking to them again to see if they have any additional information that'll help us with regard to locating him," Ross said. "Anyone he may be affilliated with in the Philadelphia area."

This is not the first time Robinson has run away from police. In 2015, he escaped from a Wilmington juvenile corrections van by kicking out the back window, according to police. He was 17 years old at the time. Delaware authorities say he previously was convicted of gang participation and firearms violations.